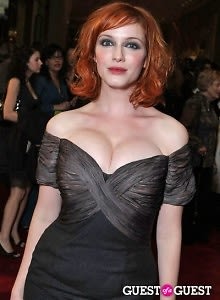 At the Golden Globes, voluptuous "Mad Men" star Christina Hendricks managed to lose her $850,000 diamond bracelet loaned to her from Chopard. Cue the jewel chase!

According to The New York Post, Hendricks realized she had dropped one of the two bracelets Chopard had lent her for the event; the flushed and frantic redhead raced around hoping some one had tracked it down on the red carpet.

A month ago when we caught her at the House of Walker to discuss her red hair and predilection for a nice Old Fashioned, we never could have imagined this fate.

An event worker had tracked down the bijou, and apparently when Hendricks was unable to secure it to her wrist, she put it in her cleavage for safe-keeping.

A bit of a kerfuffle ensued when Hendricks, who tried to pass along the bracelet to her publicist for safe-keeping, was not allowed to leave the auditorium.

Considering the location from which she drew the piece of jewelry, it is doubtless that she got her way.