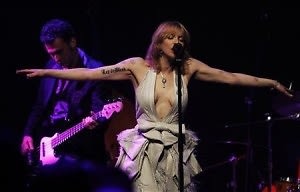 Courtney Love’s swanky, 4,000 square foot West 10th Street town house went up in flames at 1:50 a.m. last night, starting in the bedroom and spreading to the curtains.  Court was in the house and tried to put out the fire herself, before fireman were called.

Knowing how to deal with crisis, Courtney managed to avoid being seriously injured, or worse, and made it out with only a minor burn to her hands caused from trying to extinguish the flames, reports the NYP.

It is not stated how much damage was done, but it took two dozen of New York's finest to contain the fire, which was put out by 2:40 a.m., nearly an hour after they arrived.  There is also no word on how it was sparked, but the NYT states "it has been deemed not suspicious."

Courtney is a smoker and has started fires this way before. Just for safe measure: STOP having a cigarette in bed! Anna Wintour is never going to change her mind about being her neighbor now, not to mention life would be so much less fun without her to spice things up.