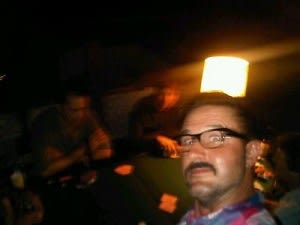 Here's a good one: Lockhart Steele, founder of Curbed and Eater, was in the middle of a rooftop poker game in the LES, when he heard shouting from across the street at the Hotel on Rivington.  "Some dude in his hotel room had spotted our poker game and was shouting, 'CAN I JOIN YOUR POKER GAME' over and over", Steele writes on his tumblr. You know where this is going, don't you?-

"Ten minutes later, a random guy appears on my roof. “Hey, I’m the dude that was shouting from across the street.” Awkward moment. Then Daryl says, “Hey, I recognize you.” Uh, it’s David Arquette. He wants to play poker."

Is this one of those "Only In New York" things? Or, more probably, "Only If You're Lockhart Steele"?

Arquette bought in to the game, and stayed for over two hours. He even tweeted about it.

At the end of the night he went all-in, lost, and bid the gentelemen adieu. But not before showing off a new tattoo he got at Lollapalooza. 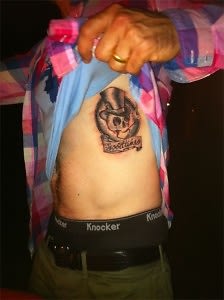 For way, way more detail, read the full account at Steele's tumblr. And, the next time some random person shouts to join your poker game from across the street, just say yes.