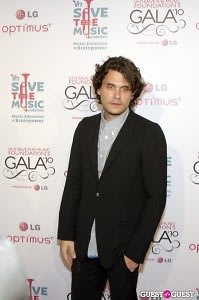 John Mayer has a habit of saying the darnedest things. We've reported on his burgeoning bromance with College Humor's Ricky Van Veen, but what happens when a young woman approaches him at a party?

As the New York Post reports, while out at Wicker Park on the Upper East Side, Mayer claimed clairvoyant abilities and spit some game when the foxy lady approached. According to the Post's source, Mayer gave a reading of her future:

"He said that she was going to make someone very happy one day, as long as she remebered to talk dirty while having sex."

Apparently the girl beat a path away from Mayer without another word.

Mayer has become notorious for his sexually-laced one-liners. Of ex-girlfriend Jessica Simpson, he famously said, "Yeah, that girl is like crack cocaine to me. Sexually it was crazy. That's all I'll say. It was like napalm, sexual napalm."

As Mayer told Playboy last February, "Before I make coffee, I've seen more butt holes than a proctologist does in a week."

Mayer is ever reliable with the quip, and we look forward to what joys he will bring next year.