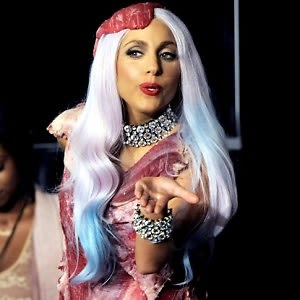 Metro area butchers were not impressed with the quality of raw meat in which increasingly tiresome provocateur Lady Gaga draped herself at the VMAs. Noting the lack of prime cuts on the "dress," Yonkers butcher Peter Cacioppo tells the News, "it ain't refrigerated. It's probably stinking bad."

Was Cacioppo's critique an honest, expert appraisal or revenge born out of hometown pride?

After she broke out of the Lower East Side rock club scene and before she became the world's top pop star, word got around, at least in Westchester County, that the ascendant Gaga was a Yonkers native. It was a coup for the long-struggling city, which sits on the border and in the shadow of creative, star-making New York City. Gaga was Yonkers' biggest export since the elevator. Or maybe Jon Voight.

"I love the Bronx but I'm not from Yonkers. There's all sorts of rumors about me but that's my least favorite."

Turns out Gaga actually grew up on the Upper West Side. And her ignorance about points immediately north--the Bronx and Yonkers parted ways in 1898--affirmed her New Yorker provincialism. Not everyone in Yonkers was sad to see the Gaga link invalidated:

"I guess when everyone thought she was actually a man, that doesn't really bother her much. What a weird, ugly goof."

"ugh...que brute...thankfully, this skank doesn't claim us. We have enough troubles."

"Who cares where this walking Petri dish says she's from? Are we in a contest with some other jurisdiction over talentless hermaphrodites?"

But surely it stung some locals. Cacioppo lives in Yonkers and is head butcher at Ottomanelli Brothers on the Upper East Side, so that Gaga dis might have been as personal as it was professional.

Regardless, between pissing off the Mets and Yankees and her increasingly outlandish and non-musical cries for attention, Gaga's shtick suddenly seems tasteless and undercooked.