If you read Vanity Fair, Vogue or any other publication staple for living in New York, the name Lapo Elkann probably rings a bell. A more than public figure, his family and personal history are legendary on the international scene. My mother had "Hello" magazine shipped from England to San Francisco when I was growing up, so if this is only just a familiar sounding name, let me briefly fill you in on the backstory. There's always room for one more celeb to keep an eye on, especially one that's actually deserving of the attention.

This is Lapo in Milan for the Fendi show last week, accompanied by his girlfriend Bianca Brandolini D'adda. If his eccentric suit caught your eye, you have good taste. Lapo often wears the custom made suits of his grandfather Gianni Agnelli, both of whom held the honor of placement on Vanity Fair's International Best Dressed List Hall of Fame. Lapo carries on Gianni's tradition of displaying impeccable taste with personal flair, as small touches such as wearing his watch outside his cuff framed every look for the elder, from Euro jet set to power business man. 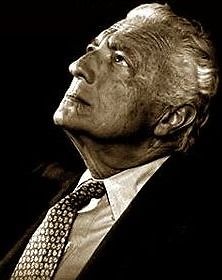 Time to back up. Lapo's grandfather Gianni (left) was the chairman of Italian car maker FIAT, a company based in Turin and for so long a fixture in the Italian economy, the name as iconic as it was critical to the job market. Gianni was a known playboy, when the word held depth (side note, I spent the better part of my teenage years looking for a modern Profirio Rubirosa) measures beyond today's frequent and pathetic interpretation: a guy with a big bank account that likes the ladies. Agnelli was the old world version, a James Bond-esque figure who appreciated beauty in all things machismo, from fast cars and boats to the powerful horse and daunting black diamond ski run. Jackie O reportedly pursued the man's man, until it became obvious that she was not going to nail him down.

So Lapo had quite the role model. A frequent party circuit fixture, his fun loving ways persuaded the FIAT group to pass leadership largely to Lapo's brother, John. However, that hardly stopped Lapo from making his mark. Bringing youthful energy and urban flair to the aging company 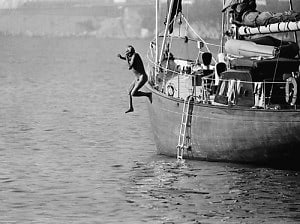 with waning influence, he founded Italia Independent and Independent Ideas. The former brings the Italian lifestyle and global vision to "personal belongings," while the latter is responsible for the world party tour in honor of Fiat's birthday, big bashes spanning the globe and delivering the name to a new generation, among other things. A branding master, Elkann put the Fiat name on edgy soccer jerseys and t-shirts, just a minor example of how he knew that carrying on the family owned company and legacy meant taking a fresh angle.

So all this forward thinking and business savvy seems substantial, enough to gloss over some heavy partying. That was largely true, until Lapo overdosed while in the apartment of a middle aged transsexual prostitute.

In 2005, Lapo fell into a coma after a cocaine binge with "Patrizia," a fifty year old male hooker. Elkann, aged 28 at the time, was in a relationship with one of Italy's most beautiful women. While possession of a minimal cocaine amount for personal use is actually legal in Italy, what Lapo ingested included large quantities of a heroin mix, in addition to alcohol.

Lapo recovered from the incident and came to America, where he underwent rehab. During the stay in recovery, way before it was trendy, he enjoyed visits from people like Henry Kissinger.

In the four years since this incident, Lapo has avoided further scandal. In a relationship with the woman accompanying him to the fashion show, he has also been linked with stateside beauties such as Mary-Kate Olsen. His past evidently behind him, Lapo continues his branding projects and remains a fixture on the social scene, and is still very much a master of the closet.

It's Monday, and it's nice when a Fashion Week shot can stir up tales of style, sex and drugs; yet end happily. People love a good comeback. Keep an eye on Lapo. There are many more a dapper suit to be seen, and I have a feeling this Italian social is just getting started. 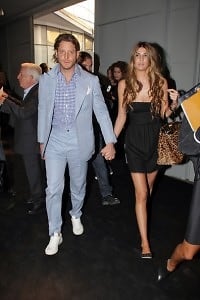 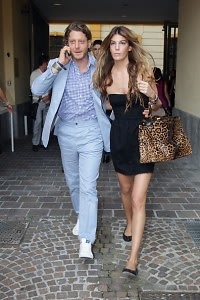 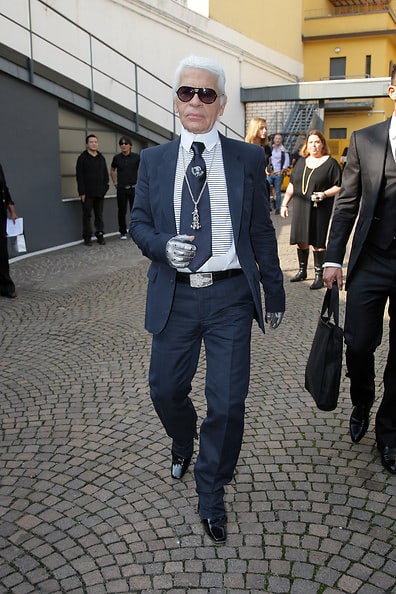 Karl Lagerfeld also made the show