No booze, no drugs, no shoplifting, no court dates. Never, ever again. Sources close to Lindsey Lohan reported Lindsey's mantra to TMZ just this past May shortly after her court sentencing to 3 years of probation and 480 hours of community service. Seen out wasted this weekend, her sobriety was shorter lived than her film career. 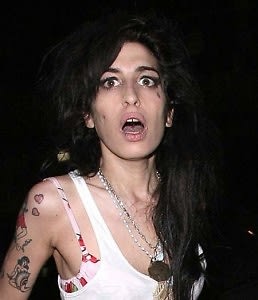 Lindsay Lohan was once again a complete drunk mess this past Saturday night at Chateau Marmont in West Hollywood. She made a point not to order drinks from the server for herself but gladly sipped, gulped or shot down whatever was placed near her. By the end of the night, her friends had abandoned her and the manager found her hanging on to the curtains before aiding her back to her Escalade.

This was culled from Lindsay's twitter feed last night, “Love how going to a friends birthday turns into a slew of lies! grrr - oh well... happy sunday all”. Hahaha she must think the rest of the public is as delusional as she is considering she plead poverty this past week in court while wearing $1200 Louboutin strappy stilettos. Maybe she hoped the judge wouldn't recognize those famous red soles?

Ok! Magazine reported that Amy Winehouse broke down watching the live footage of Lindsay Lohan being sentenced to jail. Winehouse apparently told her friends, "That could have been me!" Maybe now Lindsay will look at Winehouse's premature death and say the same.

In 2009, the press seemed to be taking bets on which celebrity would outlive the other, Amy Winehouse or Lindsey Lohan? The two were often the center of one media blitz or another for their careless and dangerous lifestyles. Lindsay looks like the winner but for how much longer?