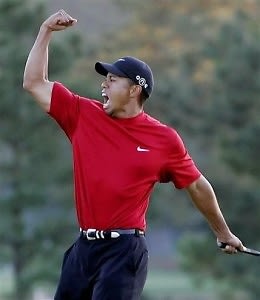 Fresh off his divorce from Elin Nordegren, Tiger Woods has allegedly moved into a new apartment in downtown Manhattan. Will New York save Tiger's reputation and dating life? And will the move please city girl and mistress #1 Rachel Uchitel, who is recovering from a recent co-op board snub?-

US Magazine's scoop about Tiger's new digs comes two weeks after another scandal-ridden celebrity, Lindsay Lohan, announced plans to relocate and rehabilitate her reputation in NYC. That move prompted the Times' Douglas Quenqua to write about the appeal the Big Apple holds for bad apples. After all, New York is:

"...a place [where] one can simultaneously get lost and be discovered. Historically, that has attracted not just the unknown in search of fame, but the infamous seeking redemption."

But while actors are drawn to the lights of Broadway and the presumed prestige of stage work, athletes don't have such an obvious redemptive path to take. While the paparazzi glare is dimmer in Manhattan than Los Angeles, the Media Capital of the World is a tough place to fly under the radar for someone used to, say, Windermere, Florida.

One new neighbor who Tiger will likely avoid is local nightlife "hostess" Rachel Uchitel, wherever she might land next. A Park Avenue co-op board is said to have just shot down her application for a $1.995 million apartment on the Upper East Side, thanks to her notoriety. Tiger, presumably, settled for a condo.