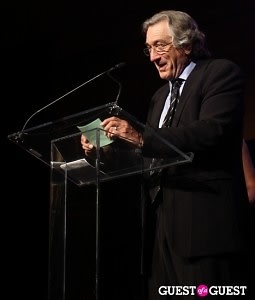 The gala, held at the Gotham Hall, included a special video appearance of longtime friend and movie partner Martin Scorsese.

"We’ve known each other for almost half a century now,” joked Scorsese, as he apologized for not be present. Scorsese's currently in London shooting a new film, whose name he didn’t reveal. “But for sure, this is going to be my first 3D feature,” he said with a smile.

Whether this last statement was true or not, De Niro wouldn’t confirm, as he stubbornly stayed away from most reporters and just posed for pictures with a few fans. 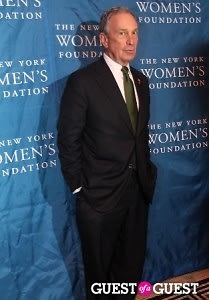 In his acceptance speech, De Niro spoke against male-female stereotypes, recognizing he no longer “has the final word” at home. He also jokingly recognized the increased power of women in society by stating that at some point New York men should stop be treated “as second-class citizens.”

ABC’s Good Morning America’s anchor Juju Chang hosted the evening, which also included a special honoring sequence for Agnes Gund, president emerita of MoMA and chairman of its international council "She’s the very reason we are here, and it’s an honor to introduce her work,” Chang said.

Mayor Michael Bloomberg, who attended that evening, gave a brief speech praising the work of the NYWF before warning “if any of you has problems with parking tickets, just let me know. Ms. Chang can help you.”