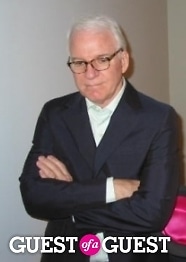 Steve Martin's so-labeled "boring" performance during a talk at the 92nd St. Y has sent the actor-writer-comedian on a defensive campaign. But as he shakes his fist, through articles and Tweets, here's why he can let up a bit...

An audience has every right to expect to be entertained when paying for a comedic Steve Martin performance, but this type of subdued conversation at the Y is not a opportunity for Martin to flash his jocular acrobatics, his one-liners, and his jigs.

That the audience tired of the art talk, the subject his most recent book, An Object of Beauty, indicates they came to the room for the wrong reasons. Martin--who wears the hats of banjo player and writer in addition to comedian--has no obligation to give a Saturday Night Live-quality show during a conversation.

He's since defended himself in a Times op-ed and through an active, humorous, Twitter feed.

Yesterday, he went on CBS's "Sunday Morning" to defend himself to Rita Braver:

It seems in poor taste, as Martin points out, that this charitable event offered to return money spent to support a non-profit:

"Then I though, 'Gee, we were there for free, and the 92nd Street Y is a non-profit organization, so we raised money for them.' And I thought 'how bad were we that they took charity money--to give back charity money'...I pictured a kid going to camp and they go, 'No. You know the Pink Panther guy you love so much? He is keeping you from going to camp. We're taking you to the trash dump instead...So Steve Martin is the one taking you to the trash dump."

The dude has enough street cred and accolades to have an established reputation without these responses to the internet opinions and flaying and lambasting.