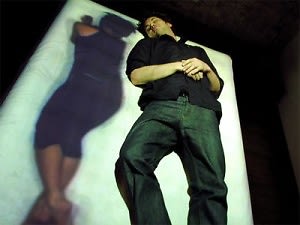 Those wacky urban college kids with their energy drinks and mumblecore and new-fangled mePods. It's enough to make any twenty-something yearn for the simple pleasures of mopey, fumbling dorm room spooning. The solution is upon us: Virtual Girlfriend. Now with less backtalk and more silent disdain for your Wii compulsion!

Drew Burrows of NYU's Interactive Telecommunications Program displayed his new gift to singles everywhere at the Tisch School of Art show recently amid much fanfare. Burrows and his slightly creepy yet not-altogether impractical product:

"It's simple to behold — a single mattress, tucked into a dark, curtained back room of the showcase space. On it: a lithe brunette. She's perfectly quiet, but once you sit or lie down, she responds to your every move. Lie on your back, she snuggles up right next to you in a log position. Curl up in the fetal position, she spoons. The only hitch: She's 2-D. "Yeah, you can't feel the girl. That's the thing," Burrows explained as he demonstrated his invention, an "infrared sensitive" light projection (meaning it reacts, and the projected woman moves, based on an infrared sensor) called INBED. "Still, it's so nice if you're tired and worn out to have someone to curl up with."

Sounds like a great way to slowly wean your way out of the Post Traumatic Stress Disorder phase of a recent breakup, though it might just end up breeding more stalker tendencies among the easily-heartbroken emo boy set. The more pressing question: Can you customize your virtual spooning partner?