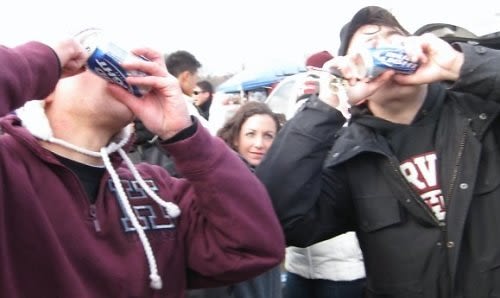 For those of you who have been to or heard of the Harvard Yale Football Game, you are probably aware that it is one of the "great" Ivy League tailgates of the year.  Yes, oxymoronic indeed.  It's when all the students come out of the woodwork, or rather the library, and engage in what might be the largest amateur drink fest in the country.  It's also a time when the alums in NYC make the pilgrimage up to their alma maters to watch The Game and relive those John Belushi-esque days as an undergrad.  And this year's game at Harvard last weekend was no exception.

The University administrations in the past have struggled to keep the festivities civilized and under control, first by corralling students into a closed off area (this year it was in the Harvard Tennis courts).  But that didn't work, so they then imposed a "no kegs" policy a few years back.  That still didn't work.  So this year, they ended the tailgating at 12pm.  Yes, this is not a joke. And did it work?  Not really, most people just fast forwarded their intake by a few hours, and then continued up at bars in Harvard Square.  But you can't blame the Universities for trying!

And try they did.  Harvard University Police officers started moving people right after 12 and shortly thereafter no one could be seen in the field of cars.  But it was probably the weather that might have been the most effective factor in making people leave.  It was around 26 degrees with a windchill of 10, making it hardly bearable unless you were sipping on sauce to keep you warm.

So maybe you still don't know what "Harvard Yale" is because you've heard it being called "Yale Harvard".  Despite the smoother sounding and perhaps linguistically better "Harvard Yale" name, Yalies or Elis as they are properly referred to (after their founder Elihu Yale) insist on putting the name "Yale" first.  So if the game is in New Haven, CT (which it will be next year), you will most likely see programs and hear New Havenites imposing their will on the name.  Not to worry, its the same game and same antics.

Oh and who won this year?  Well most people don't really watch the game or pay attention, but in case you're curious Harvard won.