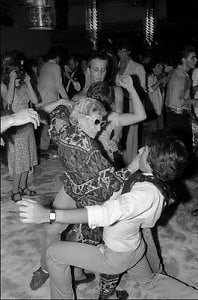 Born in 1900, Sally Lippman earned her "Disco Sally" moniker through the crazy dance moves she brought to Studio 54 during her widowhood.The grand-matriarch of nightlife, known for her wild dancing even at an advanced age, was the ultimate club kid.

She reinvented the cougar and brought Studio 54 to its knees.

Before becoming a web meme or blogalite got you famous, "Disco Sally" relied on her rug-cutting to become a notorious and beloved fixture in Manhattan nightlife.

As New York magazine reported in 1991, "A tiny, 77-year-old lawyer named Sally Lippman was mourning the death of her husband when she happened upon the disco scene and changed her life. Dressed in tight pants and high-top sneakers, she became Disco Sally, a star of Studio 54 and Xenon who'd draw an audience of adoring fans as she got down on the dance floor."

Apparently celebs like Dustin Hoffman and Bill Murray queued up to be her dance partner.

This photo from February 13, 1979 shows how Disco Sally, then 78, wooed her 26-year-old beau, John Touzos, with some serious grinding at Xenon. She brought dirty dancing to a whole new level.

Look at her bring him to his knees. 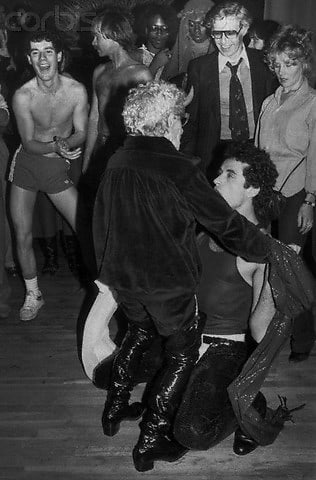 Touzos, known as Sally's "Greek God," met the energetic old woman on the club circuit and the two married at Magique nightclub with stars like Lindsay Wagner, Peter Frampton, and David Brenner.

As Scott Bitterman, a  former busboy and then assistant manger at Studio 54, recalls,

"My favorite regular at the club was a bright, funny elderly woman who came several nights a week and danced much of the night. I attended several dinner parties at her apartment with friends--but the film  [54] reduced her to an insipid caricature as 'Disco Dottie.' In real life, 'Disco Sally' was Sally Lippman--a witty and brilliant attorney admitted to the New York State Bar in the 1920s. Sally represented the best of the club for me: she was neither rich nor famous. She was a woman who loved to dance and have fun with her friends in the evening."

In the movie 70s Fever, live footage inside Studio 54 depicts this old lady who liked to get freaky along with the scene's major players like Studio 54 Doorman Mark Benecke and club co-owner Steve Rubell. Set to the backdrop of the Vietnam War, the cocaine excesses, and the Water Gate scandal, this documentary from the History Channel takes you inside the craziness of Studio 54. Watch Disco Sally dance at 0:58.

Of course, Disco Sally is not the only example of a geriatric party lady getting down on the club circuit. Zelda Kaplan, the New York City party girl who has reigned as a leading socialite even into her 90s represents a nice analog to the Disco Sally trend. 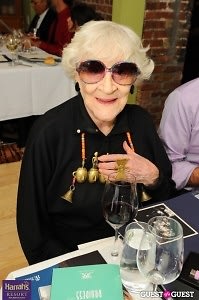 "I think one of the things that keeps me healthy is that I'm not introspective at all. The secret is being interested in things outside of oneself," Kaplan said for a New York Mag piece.

Disco Sally became so famous that an eponymous club opened on 56th Street, and in 1979, as the Washington Post reported, she would be going to Hollywood to make a movie about her life called  "Disco Sally." There were talks of selling the screen rights to her life story. 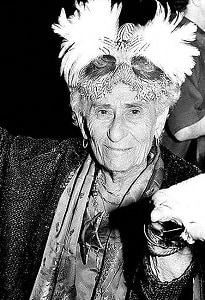 Sally died, though, in May of 1982 in Mount Sinai Hospital, and despite repeated requests, no one played disco at her funeral.

She represents the vivaciousness of the club scene and was a pioneer in authentic fame and charisma--without put-ons, or posturing, or affections. She had style and the moves to back it all up.

[Image on thumbnail via Scala Regia]