[Picture via The Fashion Spot] When doing the requisite check of my email box the other day, I was very excited to see that my friends from Refinery29 had emailed me over a piece they had done on the evolution of socialite style. Way more exciting to me than them briefing Nan Kempner, was them ending on Jen Brill. Jen Brill! Other people are as fascinated with Jen Brill as I am? But of course they are - The Chinese and Australian fiance of Terry Richardson has more style in a toss of her long, dark hair than most professionally dressed models combined.And despite her having everything it takes to be an "It girl" - the gorgeous face, the lean figure,

Don't be quick to write Jen off as just another hipster riding on her boyfriend's coattails. The style icon serves as Director of New Business Development for Fred & Associates (lofty title for such a young thing, isn't it?), a company that does business with nearly twenty artists. Before this, Jen did marketing and event planning for the Maritime Hotel for four years. Confused at how old she is? So are we. But our sources say her age falls somewhere around 28, but she could be younger. If anyone was in school with her either at Parsons or Marymount College, we'll take a graduation date, thanks.

"Everything goes so fast here if you want to be part of it, you have to be one hundred times better than anybody else, otherwise just forget New York, just go live in New Jersey, get married there and have kids" - Jen Brill in JALOUSE, September 2008

Jen's style, like her attitude, is easily admirable, but hard to imitate. Case in point: Not many girls are comfortable enough with themselves to carry off the mismatched, body conscious outfits she does and make them work. Jen is not afraid to bare some skin (as we know from the internet - as it is not hard to find a pic of her frolicking topless for friends), in a tight dress or a sheer top. Her love of fur and sky-scraping heels, accents that shine, and red lipstick may have anyone else looking like a Russian hooker but not Jen. With her downtown manner and her upscale labels - think YSL, Chanel, Nina Ricci, Balenciaga - fashion companies and magazines are already buzzing about the New York "It girl'. With campaigns for Sophomore, articles in Interview, and an upcoming spread in Vogue China, not to mention the ridiculous amount of online coverage she gets from blogs and fashion sites, it will come to no one's surprise if she truly is the next Chloe Sevigny - a comparison often made, and one she seems to be flattered by. [Photo via Apple Daisy Girl] 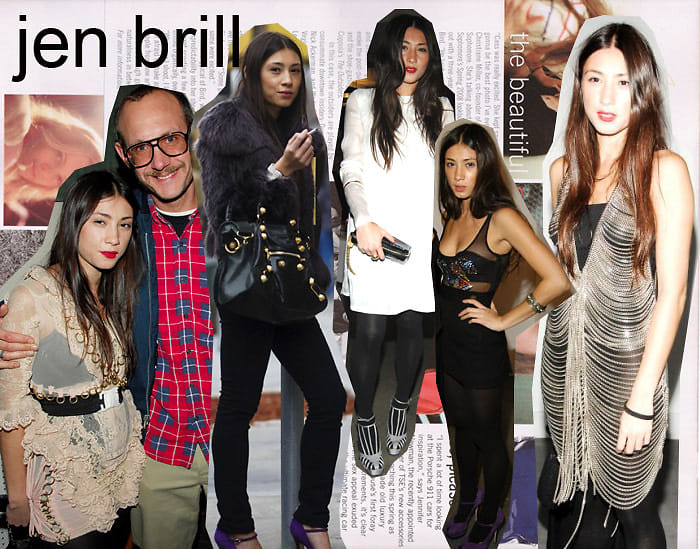 So why else, besides her effortless flair, do we find Jen Brill so entrancing? Lots of girls can throw on a pair of YSL heels and slick on some red lipstick, but not many will have the same nonchalance. It's her quirks that make her so fascinating, and her open honesty - the smoking, the flashing, the tattooed older boyfriend. How she discusses the high school gang, the "Prep School Gangsters" she was in, and how now she doesn't drink or do drugs at all. It's not just her beauty, which is more natural than that trademark painted pout, or a designer wardrobe, but her attitude as well. One that basically says: This is me, like it or not. Well, guess what? We really, really do. [Picture via The Fashion Spot]