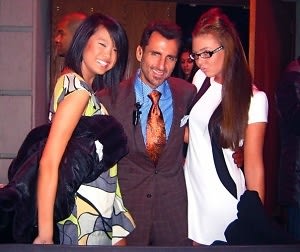 Today is Wass Steven's Birthday and we would like to wish a very HAPPY BIRTHDAY to the legendary (and most stylish) doorman.  We missed out on his birthday party last night (at Marquee of course), but would like to take a moment today to toast another year of impeccable style ala Wass Stevens. Wass sports custom made Ron & Ron suits and runs the door at Marquee.  Always located on the left side of the door, he relishes in his 30% acceptance rate, and 70/30 girl-guy ratio (sounds like he is running a school of higher education).  At Veruka, Wass was known as the highest paid doorman in New York City, and has certainly continued this trend at Marquee.

He has also been shot more times than 50 cent by disgruntled club rejectees over the past two decades.   And those Italian driving gloves you see him wearing?  Those are in case he has to break out his semi-pro boxing skills and take you to the matt!  Wass doesn’t mess around with his suits or his job.  Curiously you’ll NEVER see him inside Marquee enjoying the crowd or drinking, he’s ALWAYS at the door.  And you’ll NEVER get his age.  He’s said in different interviews that he is either in his 30s or refuses to give an age.

Well, whatever birthday this may be....you can't put an expiration date on Wass Stevens.  He will always be in style.  Here's to another year well done Wass!

[Who Is Wass Stevens?]
[Wass Would Never Make This Mistake]