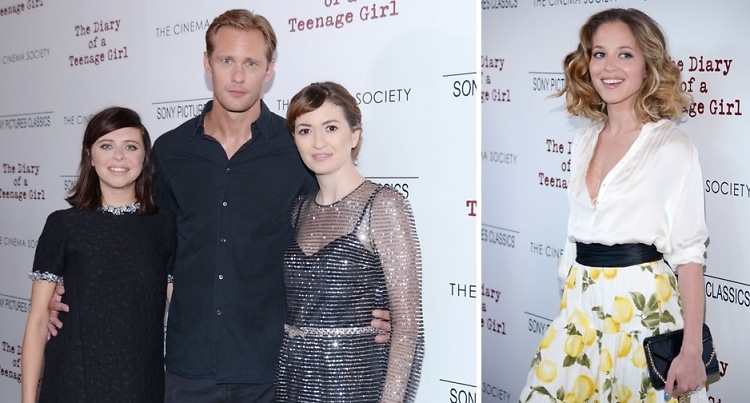 When we were little monsters, we would tiptoe into our siblings' rooms, scour under their pillows and beneath their mattresses, hoping to sneak a peek at the inner thoughts and secret happenings of their personal lives. Author Phoebe Gloeckner's novel, Diary of a Teenage Girl: An Account in Words and Pictures, exposes the unfiltered emotions, feelings and stories of a young teen stumbling, falling, and standing strong during the trials of adolescence.

It is with artful writing and direction (scattered with cartoon drawings) that Marielle Heller was able to assemble a star studded cast (newcomer Bel Powley knocks us off her feet in the lead role of Minnie Goetze, while Alexander Skarsgard embodies the provocative part of Minnie's lover and mother's - played by Kristen Wiig - boyfriend. The story makes us laugh and have pangs of I remember that feeling and presents one of the most real teenage accounts of the day. The Cinema Society hosted a star studded screening of the film, which is now in theaters, and an after party at Jimmy at The James. A night and a film to remember.