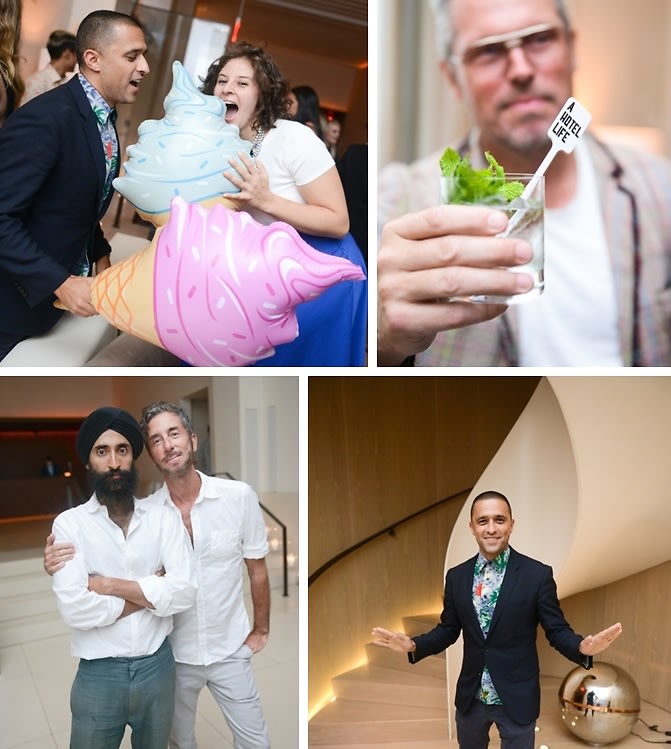 In a sea of travel magazines, blogs, and handheld city guides, it's nearly impossible to truly distinguish yourself from the pack...but that's exactly what hotelier Ben Pundole did with the advent of A Hotel Life two years ago. Pundole, an impassioned traveler himself, decided to let his creative, eclectic, jet-setting friends including Waris Ahluwalia, Zoe Buckman, and Fiona Byrne photograph cities and review hotels themselves during their jaunts across the world. The site has taken off, giving readers an insiders guide to coolest places in the world, from the coolest people in the world. Last night, two years later, the aforementioned crew once again found their way to the luxe EDITION Hotel for a night of revelry celebrating Mr. Pundole and A Hotel Life.

Right outside the entrance of the hotel, there was a cart serving shaved ices to cool down the guests and kick things off. Inside, the lobby bar was packed for the entirety of the party, with refreshing watermelon cucumber (and rum, of course) drinks and vodka cocktails making their way around. Every now and then inflatable ice cream cones which mimicked the invitations were tossed above the crowd, but it was hard to notice when guest after stylish guest steadily trickled into the lobby.

The nightlife crowd was in full force, with DJs May Kwok, Franco V, Atlanta de Cadenet, and Alexandra Richards (who was actually DJing, on her birthday no less) in attendance. Jewelry designer and man-about-town Waris Ahluwalia came by with The Mirror Cube co-founder Jake Hoffman and restaurateur Jean-Marc Houmard and was greeted with a flurry of camera flashes. Naturally it was Pundole's closest friends who stayed out the longest. Phil Winser took a break from upstate New York and showed up in a sharp electric blue blazer, while Ric Pipino and Lex Kendall were relaxed and jovial well after the party officially ended. It was certainly a friends & family night at the EDITION, and with all the tastemakers we got to party with last night, we're excited to see they're going to bring to A Hotel Life next.