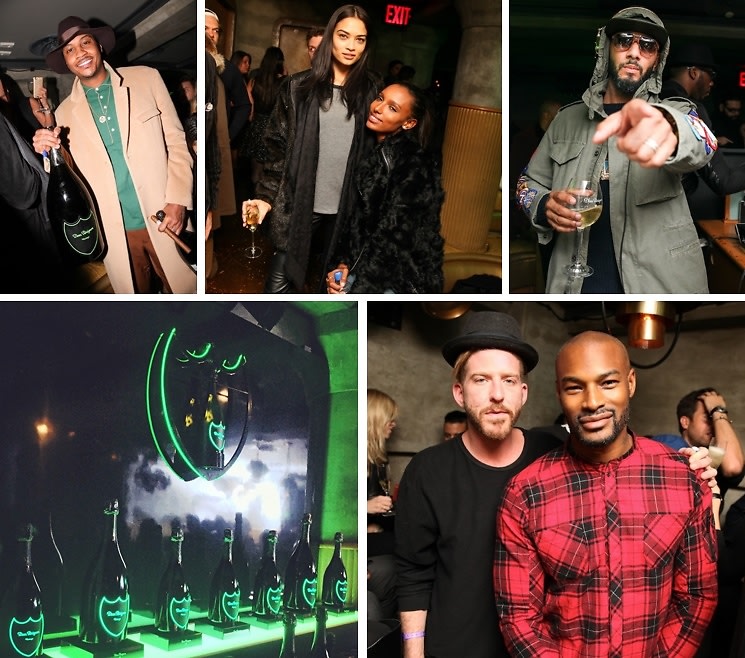 Last night Dom Perignon teamed up with Carmelo Anthony to host 'Lights Out,' an after-party for the NBA All-Star Game. Despite the frigid winds, it wasn't long before a line formed outside Gided Lily, with the fashion crowd already used to powering through the cold this week. Inside, Dom Perignon liberally decorated the place with green neon lighting, as dozens and dozens of their famous glow-in-the-dark bottles lit up the dark space. The diverse guest list included artists Harif Guzman and Dustin Yellin, models Tyson Beckford and Shanina Shayk, and even NBA legend Scottie Pippen.

Swizz Beatz finally got on the decks at 1 a.m., and was shortly joined by Carmelo who was casually holding a cigar in one hand and a comically large bottle of Dom in the other. Late into the night the crowd was still alive, with guests like Brendan Fallis and Hannah Bronfman dropping in. The room got a final surge when Public School designer Maxwell Osborne and Jenna Lyons came through with a crowd for no other reason than to dance, which the two proceeded to do until the lights came on.