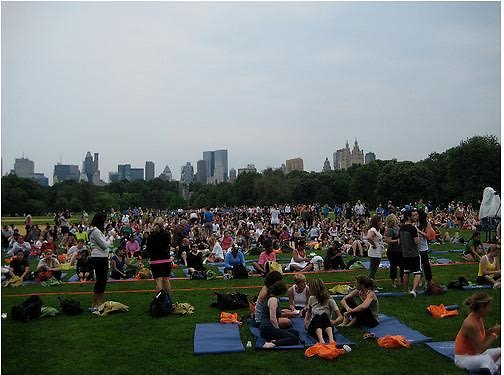 Yesterday the much anticipated "world's largest yoga event", hosted by Flavorpill and JetBlue's TrueBlue was held at Central Park's Great Lawn. 10,000 people showed up yesterday hoping to be part of the biggest zen experience New York City has ever seen. The event broke world records with its massive crowd.-

Just as everyone was unrolling their free yoga mats, courtesy of JetBlue Airlines, the rain began to come down. Acclaimed yogi Elena Bower led the crowd in a series of "oms" and two sunless sun salutations before the Parks department shut the event down. Mother nature took over and the crowd began to regretfully disperse.

Flavorpill's intent was to show the health benefits of yoga and provide access to the practice for those new to it. Even VIP yogis like Donna Karan and Russell Simmons showed up for the rained out event.

The combination of New Yorkers stuck in the rain at a canceled event should have produced a very disgruntled crowd. But the attendees left calmly and reassured that the event would have a rain-date. So maybe all wasn't lost? Flavorpill helped calm New Yorkers for the evening and proved yoga's healing powers really do work.