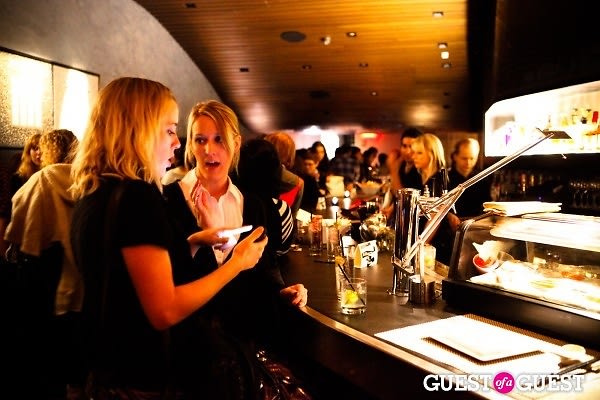 [The OfAKind fashion site's launch party at the Thompson Hotel was a hit!]

The evening was all about film, fashion, and tech. Kirsten Dunst showed up at the premier of her new film, which is sadly not Bring It On 5: Cheer Hard Or Die Trying, as every designer who matters showed up to fete iconic editrix Anna Wintour. And speaking of fashion, a new web site featuring emerging designers launched! We've got photos...

Go HERE for more photos by Mark Iantosca, and tag yourself and your friends!

Kirsten Dunst hasn't been in a film since 2008 and suffered depression in the past. If last night's movie premier All Good Things is any indication she is poised for a major comeback. The movie focuses on the true life story of Robert Dunst. While never convicted of killing his wife Katie who disappeared in 1982, all evidence points to the wealthy real estate heir who left a few more bodies (possibly) in his wake and took up dressing as a woman.  But it's not only Kirsten's acting skills in the role of Katie, she seemed genuinely happy at the after party at Buddakan, sipping drinks, dancing, and talking to cast mate Kristen Wiig and director Andrew Jarecki. Ryan Gosling, who is also in the film, was sadly absent. You can read more about the after party HERE.

Go HERE for more photos by Benjamin Gustafsson, and tag yourself and your friends.

Of a Kind celebrated its launch at the Thompson Hotel. The site features a new designer each week with their inspirations, personal life, taste, training, etc. A special limited edition (between 5 and 50 pieces) item is made available exclusively for Of a Kind.

The fashion elite came out in their finest stilettos to the Plaza to watch Mayor Bloomberg host the fete to honor Anna Wintour, Diane von Furstenberg, and Macy's CEO Terry Lundgren. You can watch GoaG's exclusive interview with LeeLee Sobieski HERE.