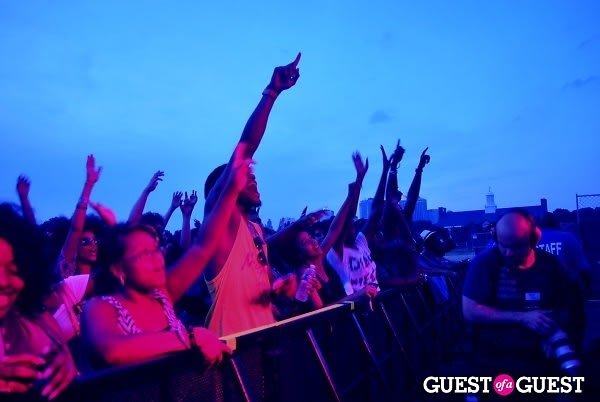 Go HERE for more photos by Stephanie Ketty and tag yourself and your friends!

Hard provided a music experience for those New Yorkers who love to rave, get down and dirty with thousands of strangers and weren't afraid to show some skin. (Looks like some attendees took notes from our Summer Music Fest trend report!)

Also, depending on how much you felt like raging, you could choose the "Hard" stage or "Harder" stage. (Which to me, is almost as character defining as choosing between "fire" and "ice" on the Dueling Dragons ride at Universal Studios.) Guests who didn't want to be bothered with making such a life-altering decision set up camp where ever and proceeded with their very own impromptu dance party.

The culmination of the evening came with M.I.A.'s much anticipated performance. Unfortunately, she wasn't properly miked, her voice was drowned out by her mashed up beats, and the only time she was heard was when she was yelling at the sound team...Thankfully mother nature was on her side, and it began to downpour, cutting her set short. At the end of the day the only press she received was spitting in a photographer's face, but all wasn't lost! She brought the noise, and really, isn't that what music festivals are all about?