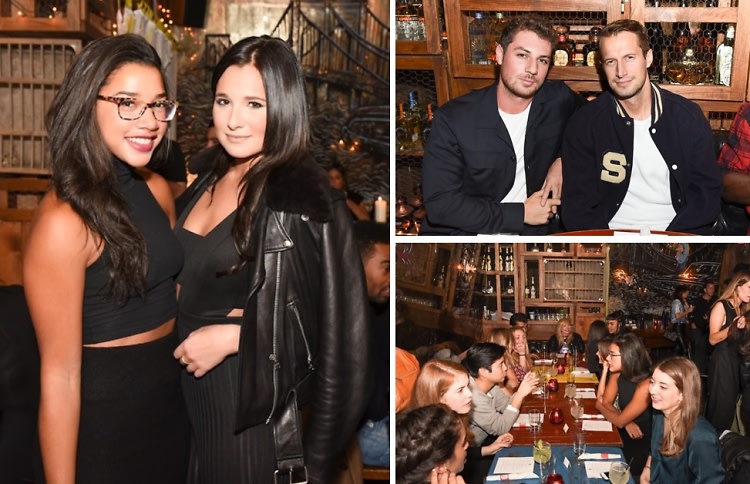 In a city like New York, the importance of Thanksgiving rests mostly on friends for the young people from all reaches of the world who make up the city. 'Friendsgiving' has become a necessity every November, even for those who eventually head back home to celebrate the official holiday with their families. So you can imagine how psyched we were when entrepreneur and DJ Hannah Bronfman and Instagram-for-foodies Wine'n Dine decided to host a hearty, healthy feast at Cafe De La Esquina in Williamsburg to kick off the holiday season.

The intimate dinner was unlike typical fashion events: most of the people in the room were actually friends, and the pitchers of margaritas on every table helped anyone who needed the extra push. Brendan Fallis switched up his usual buttoned-up look for a varsity jacket and jeans in the spirit of Brooklyn, and sat with We Wore What's Danielle Bernstein, trainer of the coolest New Yorkers Joe Holder, and one of our favorite nightlife guys Zac Nichols. Despite the nature of the Wine'n Dine app, guests were having too much fun to take photos, though the food warranted it. Bronfman's health and fitness site HBFit was involved in selecting the dishes, which were as nutritious as they were tasty. Butternut squash soup, pan-seared salmon, sweet potatoes and Brussels sprouts all starred in the guilt-free meal, something Bronfman and Fallis are both accustomed to. It was one of the most fun dinners in recent memory, and if nothing else proved with friends like these a traditional Thanksgiving has a lot to live up to.