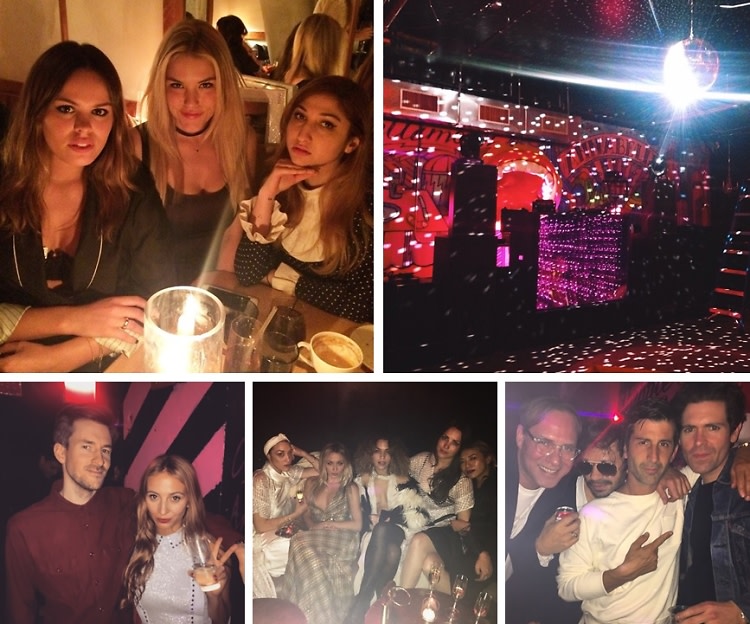 Last night Purple Magazine hosted its NYFW party, celebrating the Spring 2015 issue. The night started off with a lavish dinner at Narcissa, followed by a raucous party at Chez Andre, the club below the Standard East Village. Shortly after the doors opened, an eager crowd already formed hoping to enjoy a moment of the infamous Purple Party before capacity was reached. Nonetheless, the room was filled rather quickly, and in no time it felt like every additional person pushed the limit to the max. This wasn't a problem when Andre Balazs came down with Uma Thurman, who quickly peered at the room before calling it a night. Following their brief but notable presence, the rest of the crowd filtered through Narcissa into Chez Andre: Alexis Dahan, Bella Hadid, Mia Moretti, and Aaron Young all popped in to celebrate with the usual suspects.

Olivier Zahm stuck to his usual hobby of photographing the crowd with his retro-looking camera, while Paul Sevigny and Brian McPeck spun tunes using actual vinyl records with Andre Saraiva looming over and checking out the room. Harley Viera-Newton, Patrik Ervell, Zanna Bayne, and Eniko Mihalik helped fill out the crowd, which was more relaxed and uninhibited than at usual stodgy fashion week events. That itself was the key to the Purple Party, which has become infamous for its wild, late-night blowouts, with this new entry staying true to the cause.