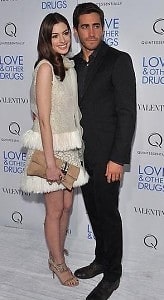 Jake Gyllenhaal and Anne Hathaway were spotted out last night at the screening of their steamy new romcom Love and Other Drugs at the DGA Theater and after-party at Rouge Tomate. Taylor Swift may have something to worry about.

The flick centers on a pharmaceutical salesman who is high on life, making money selling Viagra and literally charming the pants off women. He's a commitment-phobe and a sleaze until he meets Maggie, the artist with early on-set Parkinson's disease who keeps men at bay while trying to accept her fate.  They start sleeping together and eventually fall in love. There are plenty of sex scenes and boob shots and dick jokes and moments to make you laugh and cry.

They have much better sexual chemistry in this film than in Brokeback Mountain, for obvious reasons when it comes to differences in the characters and story line. It's pretty intense to watch, especially the nude scenes. Despite being a film about love, I wouldn't recommend it for a first date. Anne brought her boyfriend and Jake brought the least likely option, his mother. While it's only acting, I can't imagine how comfortable it would be to watch your son play someone suffering from an erection that won't go down after taking one of those little blue pills during an orgy. 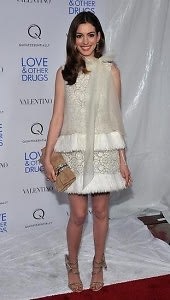 The House of Valentino, who hosted the party along with QUINTESSENTIALLY, dressed Anne in a white retro dress which in my honest, non-fashionista opinion, looked like a Christmas tree doused in fake snow. Jamie-Lynn Siegler, Leelee Sobieski, Alexa Chung, Genevieve Jones and model Jessica White were also dressed in Valentino and fared much better with dresses that did not resemble something they wore in their middle school production of Rudolph The Red Nosed Reindeer.

Jake was not dressed by The House but still looked good enough to give several groups of women at the after-party a case of the giggles. While I usually consider myself a grown-up and a professional, I was reduced to a 14 year old girl who couldn't wait to scribble his name in bubble letters on the imaginary trapper keeper which holds my sexual fantasy material. If you enjoy him on the big screen, you would likely feel the same.

Other guests included Pippa Black, Sarah Burns, Christian Campbell, Jennifer Carpenter, Peter Cincotti, Lorenzo Martone, Jennifer Missoni, Christian Siriano, Sky Nellor, Zac Posen, and more. Molly Sims came in a tight black dress and spent most of the evening near the door snuggling with her boyfriend and giving him small kisses on the neck. Peter Facinelli ambled around the room being generally friendly and playing on his phone.