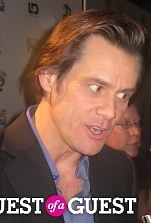 Last night at the SVA Theater for the premiere of "I love You Phillip Morris," Jim Carrey discussed how he entered into the mindset of the gay character he plays. His directors dished on his on-set hijinks: calamari anyone?

The event, presented by The Cinema Society and DeLeon Tequila, found a jovial Carrey discussing the emotional connection he felt with Steven Russell, the imprisoned character he plays who falls in love with a fellow inmate named Phillip Morris (Ewan McGregor); after Morris is released, Russell escapes from jail prison four times to be with his love.

Carrey gave a sober appraisal of the commonality he found with Russell:

"What I identified with is that part of us that feels hopeless."

To prep for the role, Carrey focus-grouped his homosexual friends in casual conversations to learn details and tid-bits about anything from mannerisms to sexual practice.

"I talked to my friends," he said. "I have a lot of gay friends, so, you know, I talked to a lot of people that I know about everything."

He also noted a steady regimen of scholarship he applied to the role ("I studied whatever I could, literature-wise," he said), with one particularly influential book on his syllabus: Larry Kramer's 1978 Faggots, a novel about the lifestyle of gay men of Fire Island and Manhattan.

Carrey ultimately did not view his character's motivations as exclusively homosexual and approached the role from a broader perspective:

Of course, something of a scandal bubbled up related to this issue of contention when Carrey appeared on the Late Show last Friday; David Letterman asked Carrey,

Carrey had a ready remark to tell it to Dave straight: 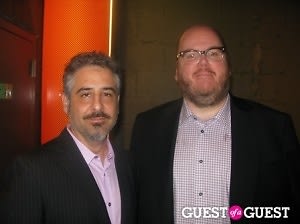 When we spoke to co-writers/directors Glenn Ficarra and John Requa, they seconded Carrey's widely-cast approach.

"Frankly, you know, it was never a discussion, the homosexuality part," Ficarra said. "He always approached it as a character. And he really identified with this guy. This is a guy looking for identity."

The film's creators had no political agenda or PSA-airs about them; they stuck to the authenticity of character in order to allow Carrey to bring Russell's character to life.

"We tried to imagine a world where it just doesn't matter," Requa said of homosexuality as presented in the movie. "We tried to write the movie from that point of view--we're past all that. It's not a message  movie. It's not about being a gay in modern society. It's a movie about two people who are just gay and O.K. with it."

Despite Carrey workmanlike approach to his acting, Ficarra did spill the beans on Carrey's on-set capers.

"One time somebody put calamari in our directors chair pocket, both of them," Ficarra said. "I don't know who did it, but I know Jim likes to play tricks. I wouldn't put it past him"

Looks like Carrey can't seem to get rid of his "Ace Ventura" days.