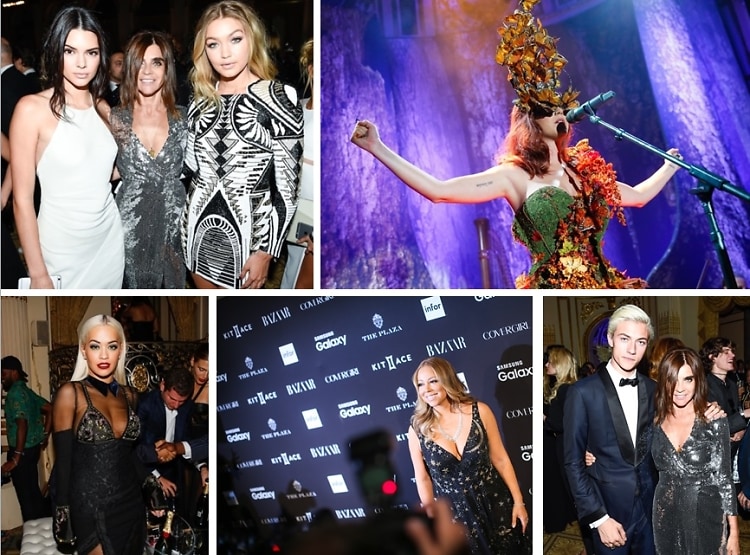 Last year Harper's Bazaar celebrated Carine Roitfeld's portfolio of iconic figures with one of the biggest parties of NYFW, the ICONS party; guests dressed to the nines, Lady Gaga performing jazz, it was all you could ask for in a fashion event. The magazine followed it up last night with another installment, this time with the renowned artist Jean-Paul Goude, once again set at The Plaza where guests donned their best evening attire to celebrate with the most notable names in the industry.

Everywhere you turned put you face to face with a celebrity or model (though, most likely a model) such as Kate Upton, Constance Jablonski, or Dev Windsor, who all stunned in designer dresses. Best dressed of all, however, had to be The Fat Jew, who wore a sleek black tuxedo...without a shirt underneath. He suggested that that's how all the guys should have dressed, which didn't sound that unreasonable as the room filled up and the heat started to take effect. Kendall Jenner and Gigi Hadid drew a flurry of bulb flashes before scurrying to a calm spot, where they sequestered themselves remaining relatively unperturbed for the remainder of the party. Both Cynthia Rowley and Jeremy Scott showed up after their respective shows took place earlier in the day, and were joined by fellow designers Wes Gordan, Prabal Gurung, and Jason Wu. Of course the crowd went beyond fashion, with Jaden Smith, Rita Ora and one of the distinguished ICONS Mariah Carey in attendance.

Naturally some of our New York favorites made appearances as well: restaurateur Phil Winsor enjoyed a quick drink with auctioneer extraordinaire Alexander Gilkes, while nightlife impresario Ronnie Flynn finally returned from a summer in Montauk to meet up with his usual cadre of models and creatives. As the guests patiently gathered their Belvedere cocktails and got as close to the stage as possible, the main event began. First a behind-the-scenes video of Icons including Oprah, Jessica Chastain, and first ever male ICON Lucky Blue Smith being photographed for the portfolio played on the screens, before Hearst CEO Duncan Edwards introduced Katy Perry. The extravagant singer, in keeping with the nights fantasy theme, wore a mask and sang in front of a woodsy backdrop not unlike the ones dreamt up in fairy tales (at one point, actual butterflies began to fly over the crowd, in keeping with the hand-applied feather butterfly adornments on her dress). She was generous to her adoring fans and played her biggest hits including "Roar," "Teenage Dream," "Fireworks," and "I Kissed A Girl," the latter of which she dedicated to Mariah. But Mariah wasn't the only one who got a dedication: "This next song is one I want you to remember when you're going about your day and you've ripped your pants, you've had two bandaids fall off the back of your heels, you're sweating, there's coffee all over your blouse, I'm talking about all the assistants here. And you feel maybe like a little plastic bag...We're all human, we all start somewhere, ask Carine."

While all the songs retained the beats which made them famous, there were still contributions made by the Plaza's house band, as well as one riveting violin performance by The Dolls' Margot to supplement the music. As the performance ended a large crowd gathered on the dance-floor to take advantage of The Plaza as a de facto club, at least until the venue closed about half an hour later. Cigarettes were being lit (and shortly after, asked to be put out) and the bars were hard at work satisfying last calls for alcohol, something Katy encouraged during her set: "Fashion week is almost over, you can drink as much as you want tonight." The talk was all about the after-parties at that point, and we ourselves ended up downtown catching Virgil Abloh DJ for Jaden, Rita, A-Trak, and Theophilus London to cap off a great night. But even that was only spurred on by the thrills that preceded it. While there might be another day or two of fashion events, the ICONS party served as the perfect send off, crowning another robust NYFW with the most glitzy and glamorous event of the fall.