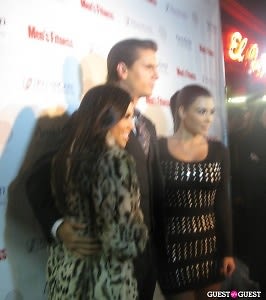 Kim Kardashian must have buried the hatchet with Scott Disick. She came out to Chelsea Room with her sis Kourtney to support baby daddy Scott Disick as he promoted Amidren, a male enhancement drug meant to combat andropause, otherwise known as male menopause.-

Yes, really. For those of you who like to yell at the screen while you're keeping up with the Kardashians, Scott isn't really a jerk he's just going through man-o-pause. Ask your mother what it's like. He's hormonal...or not hormonal, as his testosterone levels decline giving him mood swings, fatigue, loss of energy, sex drive and even general health concerns, according to the list of the symptoms on Amidren's web site.

"It's a phenomenal product for all-around performance," Scott shilled to GoaG. "If there is anything you're lacking whether you want to lose body fat or get your hair a little bit better than it was. It's an all-around great performance product. It's dedicated to the younger male as young as 35-40." 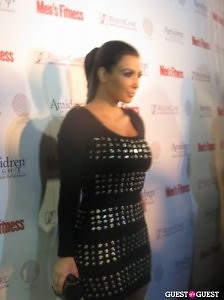 Scott, who is a wee 27 years old (andropause usually hits men 40-45), says he's not "endorsing," the product but he is a user and is "helping out as a partner on research, development, marketing, and advertising," which is actually code for endorsing. He names pros that he has seen in himself as an increase in energy level, feeling younger, and a push to work out to the next level.

Does Kourtney notice a change?  "Sure. I think everybody does." So will they be eloping as new rumors report? "I don't read every magazine. I don't have time when I am working so I don't know every rumor that is out. That's no ones real business," he stated as charming in real life as on the show.

Once inside Scott, Kourtney and Kim sat at a banquette with the products owners in front of a film crew which I am assuming was for the show. Onlookers gathered around to watch and wonder what life must be like living under bright lights. But it was only for about 8 minutes, at which point Kourt and Kim got up, were escorted outside, and left in separate cars. Scott stayed, possibly hyped up on energy from the pills, taking shots and hanging out with fellow users. He'll be on the cover of Men's Fitness soon, so everyone will be able to see the results for themselves.