Go HERE for more photos by Jillian Nelson, and tag yourself and your friends!

The evening's program began with the orchestra of a Brooklyn Public School, who performed an orchestral version of "My Favorite Things." Mayor Michael Bloomberg made a few remarks on the importance of music in public schools, then, Common came out to introduce the evening's first honoree, John Legend, who apparently skipped a few grades in school.

"Without music, I would have just been a nerd...music made me a cool nerd." He said in his video interview. 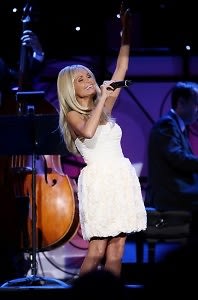 Next, Lauren Conrad came out and made an admirable attempt at reading the teleprompter in a natural way while introducing Natasha Bedingfield. (Poor Lauren seemed really nervous, but everyone was struggling with the teleprompter a little bit.)

Natasha Bedingfield gave what was probably the best performance of the night: she sang a song from her upcoming album "Strip Me", followed by a belted out version of "Unwritten", after which John Mayer, from his table in the front, led the enthusiastic applause.

Next, Jason Mraz presented the award to the ASCAP Foundation to President Paul Williams. After some awkward banter: (Williams: "I see you have a guitar". Mraz: "You give me wood, Paul." Audience: ????), the two sang Williams' hit "Rainbow Connection."

Kristin Chenoweth came out next to perform operatic acrobatics in a Sound Of Music medley which left her breathless. She then brought up honoree Julie Andrews, who is just as regal, elegant, and well-spoken as you'd think. (Also, she had her speech on paper in front of her, avoiding awkward teleprompter stumblings.)

Next, Pete Wentz came out and introduced the final honoree, John Mayer. John began his speech by telling t 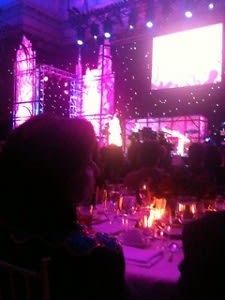 he audience that instead of giving the teleprompter a written speech, he figured he'd been doing so well speaking off the cuff lately that he'd simply continue the trend. After an awkward interlude, where he actually talked about vaginal birth ("Julie Andrews is here and I'm making a fool out of myself..." he said. The audience collectively concurred.), Mayer got on track and passionately spoke about the importance of music. On what music has done for his life, he asked the audience to think of his public persona, but without the guitar playing part. "That's what you'd get..." he said, as the audience laughed. Then he really hit his stride.

"If you want to stop bullying, give the guy a guitar." he said, as the audience broke out into spontaneous applause.

The evening wrapped up quickly from there, following a performance by Good Charlotte and two middle school music students who, hilariously, didn't know they were supposed to leave the stage at the end of the song and sat at their instruments looking panicked as Cheyenne Jackson closed out the evening.

The major gaffe of the evening came when Cheyenne thanked "Julie Dench--ANDREWS! Andrews. I looked at you when I said it and I went high..." Ouch.

Overall, a fun night, where everyone seemed to be in good spirits and moved by the cause. For more info on the Save The Music Foundation, go here.