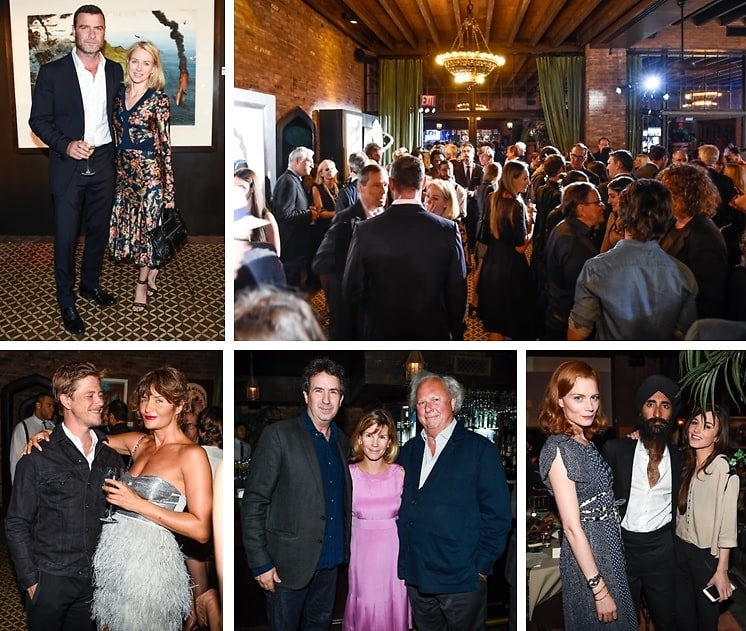 Of all the social-charitable events in NYC throughout the year, the Turtle Conservancy's Turtle Ball is one of the most unique and revered events. Environmentalism is always a big sell, especially with elite media types, but there's something different with the Turtle Ball: it's an opportunity for guests to rally around one of the most celebrated creative spirits in New York, Eric Goode, while supporting the cause dearest to him. And with something that holds that much importance, it was all but guaranteed that it would be a phenomenal turnout, which proved to be true early in the evening of the 3rd annual event.

The night was primed for excitement, if for no other reason than because the event season is just getting rolling, and most of the city is still shaking off its summer slumber. Guests made their way to the Bowery Hotel terrace where they started things off with cocktails and a silent auction. The artwork alone was worth the visit, with Goode himself a former artist (who provided a painting from the '80s up for silent auction) and well-connected with a group of acclaimed artists who graciously donated their work. Spread across the walls was a collection of art that rivaled most charity auctions including works by Nan Goldin, Dustin Yellin, Ross Bleckner, and Chuck Close. The latter had strong interest from Interpol frontman Paul Banks, who like many is a huge fan of Close. Banks was soon ushered to the dining area, where he and girlfriend Helena Christensen joined event co-chair Liev Schreiber and Naomi Watts and Watts' 'Birdman' co-star Edward Norton at one of the prime tables, in a room that seemed to be filled with them. Waris Ahluwalia, Ted Danson, and Patti Smith were spread out at different tables, and we ourselves got to cozy up to Annabelle Dexter Jones, Curtis Kulig, Jeffrey Deitch, and Serge Becker. Emcees Fisher Stevens and Griffin Dunne rushed everyone to their seats so they could introduce the guest speaker, entrepreneur Sir Richard Branson, who spoke about his appreciation for the organization. Stevens himself reminded the crowd what the night was all about, and expressed his own passion for the cause: "This is more than about saving turtles, and tortoises...this is really about buying huge tracts of land to protect many species that are in their paths...And as Richard Branson said it's 50% of all species that exist today could be wiped out, actually some people say between 2050 and 2100, and we are all really lucky to get to experience them now." The honoree of the evening Robert Kennedy Jr. also came up to the stage to give a riveting speech on how important it is to protect the environment, something he's accustomed to doing as a member and chairman of the Riverkeeper Alliance

Following the speeches, Fisher Stevens called up Liev Schreiber to join him on stage as co-auctioneer for the live auction, which put him in an awkward position when wife Naomi Watts offered up a 5 figure bid on one of the pieces, catching him off guard. 6 pieces of artwork and a few vacation spots were auctioned off with 100% of the proceeds going to the Turtle Conservancy, starting with a Peter Beard photograph which Leonardo DiCaprio immediately bid on. The actor and noted art-collector stayed active in the live auction, eventually winning a specially made painting by Walton Ford for a cool $250k and even closing out the auction winning a day of falconry with Robert Kennedy Jr. Despite all the unique offerings (which also included an exclusive Julian Schnabel plaster hat and a stay at Richard Branson's private Necker Island), the highlight had to be the opportunity to name a new tortoise species discovered in Sinaloa, Mexico. Without getting a little pious, we found the event to actually be informative and stirring despite all the eye candy. The night was a huge success because the adoration people have for Goode, but that adoration is a result of his earnestness in protecting what he cares for. "I always had a childhood love for the natural world," Goode expressed as he addressed the crowd, "and I just love what I see, and want people in this room, and people anywhere with kids to experience what I experienced as a child."