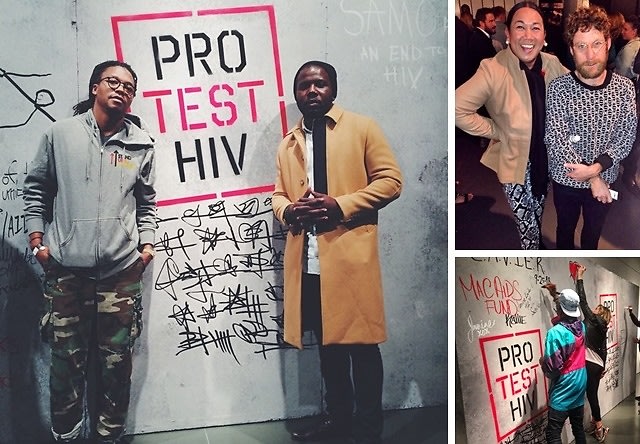 Last night, guests headed to Affirmation Arts in NYC to support PROtestHIV, a campaign by UNAIDS to raise awareness against the disease and those who don't know enough about it to get tested. One sign at the event read: "There are 35 million people living with HIV today. Half of them don't know that they're infected."

The event featured award-winning portrait photographer Martin Schoeller, as well as artists Scott Campbell, Futura 2000, Aerosyn-Lex Mestrovic and Dustin Yellin. Guests enjoyed music by Illuminati Ams with SNDCLSH: DJ Lupe Fiasco and DJ Sky Gellatly. Dustin Yellin, Lupe Fiasco, and other supporters at the event signed the large graffiti wall and took pictures in front of it with the hashtags #protestHIV and #UNAIDS to further promote the cause.