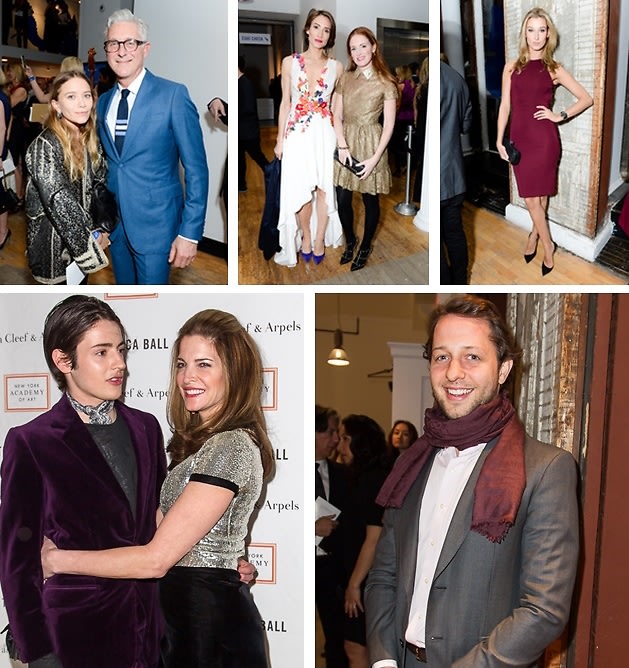 Last night the New York Academy of Art hosted the annual Tribeca Ball, showcasing their students' artwork and celebrating a purveyor of the arts. This year the honoree was publication magnate Peter M. Brant, who in addition to creating Brant Publication, serves on the board of MoCA LA, the council of MoMA, and has made a major contribution to contemporary art with his Brant Foundation Art Study Center upstate. The night began with 5 floors of artwork by the students which guests perused. The theme of the event was "Once Upon A Time," and there were treats on every floor in addition to the array of still form, print, and sculpture works. Costumed stilt-walkers made their way throughout the tightly packed halls, a caricature artist drew portraits of willing participants, and jazz musicians performed for the well-heeled crowd.

On the fifth floor, a scantily clad model in front of a whimsical background posed for pictures with guests, while 3 artists painted 2 models dressed like a Disney prince and princess standing beside a unicorn. As the cocktail portion ended, guests started to scurry over to the first floor. Peter Brant arrived with wife Stephanie Seymour and son Harry Brant. Seymour joked to the photographers that she needed a second to collect herself from the amount of bulb flashes that went off. Vito Schnabel spent much of the night catching up with street artist Kenny Scharf, who was aptly dressed in a biker jacket, jeans, and helmet in his hands. The extent of Brant's influence was made apparent as the guests trickled in: Dan Colen, Calvin Klein, Larry Gagosian, and Fabien Baron all showed up, and Robert de Niro was even seated beside him at the dinner.