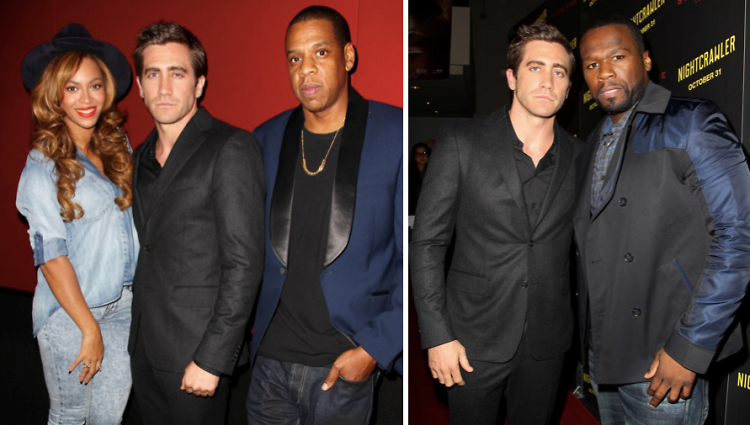 Jake Gyllenhaal got some major R&B support last night at the premiere of his latest film "Nightcrawler." Jake extended a special invite to his NYC pals Beyonce, Jay-Z, and 50 Cent, who all came out to the AMC Loews in Lincoln Center. Beyonce donned a denim on denim ensemble for the occasion, opting for a casual date night look, while husband Jay-Z sported a sleek navy blazer with a black leather trim. Fellow rapper 50 Cent (who has been spotted at quite a few premieres this year) stepped out in a similar outfit, pairing his Jay-Z style black and navy blazer with casual jean bottoms. The film's star showed off his usual suave style with an all black ensemble, having noticeably gained back the weight since his role as Louis Bloom, the sociopath/self-made reporter. Check out the other celebs we spotted on the carpet--including, yes, older sister Maggie Gyllenhaal, fashion insiders Derek Blasberg and Stefano Tonchi, and see who made it to the after party at the Stone Rose Lounge.

First-time director Dan Gilroy applauded Jake for taking on the challenging role (a.k.a. losing 30 pounds) and really making the character a part of his life. Co-star Renee Russo also mentioned how intense Jake's character was and how she tried to just "get out of his way" and let him play his part. Jake even seemed to stay in character at the premiere, showing no real emotions on the carpet and looking straight into the cameras with a cold, mugshot-esque stare.