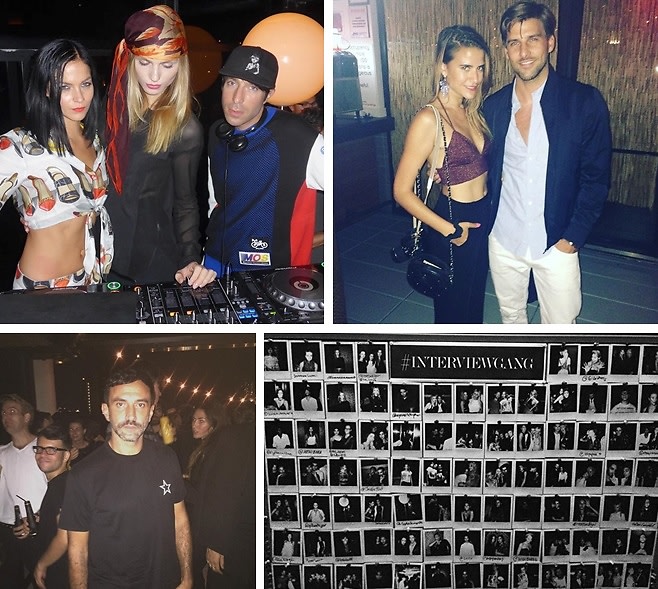 Surely enough, the thing that's marked this NYFW has been the blowout party. With the sleepy summer finally over, the parties are the biggest of the year in the fall, but the intensity has ramped up this time around. Rihanna, Givenchy, Wang, Opening Ceremony, even the new Roxy Hotel was nearly impossible to walk around freely on Monday night.

Last night the trend continued, unsurprisingly with Interview Magazine. Known for hosting one of the best events of NYFW, the choice of location was odd; the charming but relatively small Tiki Tabu at the SIXTY LES had to use every inch of space to accommodate guests at the #Me Issue launch party. The crowd was decidedly downtown, with nightlife and fashion people littered across the room.

Miles Hendrik and The Misshapes were in charge of the sounds, which actually had the crowd moving in what little space they could seize. Not that bumping up against other people was so bad when they looked like the guests that showed up: Doutzen Kroes, RJ King, Andreja Pejic, Johannes Huebl, and Jordan Barrett were among the models to swing by and have a cocktail on the 7th floor terrace. Continuing their heavy NYFW presence, Riccardo Tisci and Courtney Love also stopped by to celebrate and immediately set themselves away from the swarmed bar.

Throughout the night Interview Magazine had Polaroid photographers, including artist Matt Starr, take photos of the guests which were posted up outside the venue for them to see on the way out. There they also walked away with t-shirts printed with the magazine cover, with a few people grabbing one early just so they could have the Madonna one. As NYFW draws to a close, Interview made sure to squeeze in another major bash and remind everyone why their parties are among the best of the season.