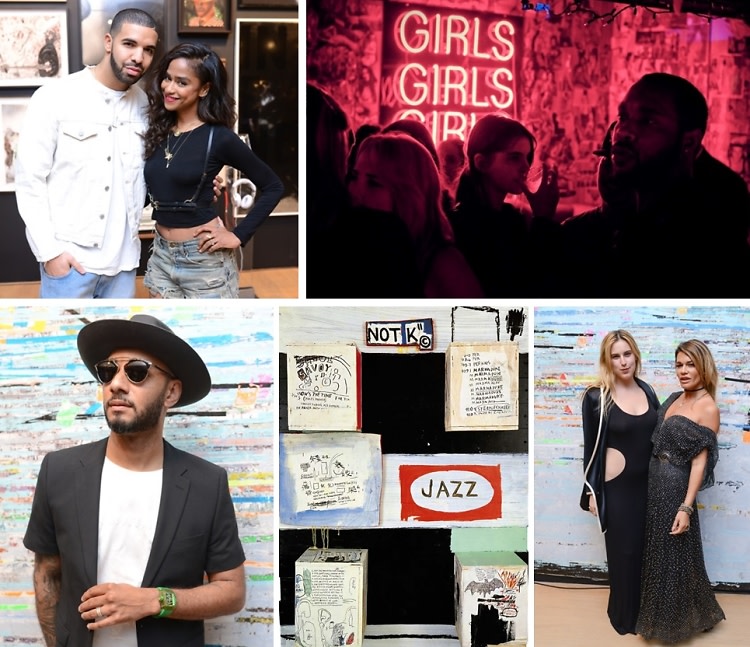 Started from the bottom now he here - at Sotheby's. Actor, rapper, perfectly emotional male human, and now fine art enthusiast and certified exhibition curator. What can't Drake do? Well, he can't smile for our Instagram photos for one, but we forgive him. Last night we took the trek to the Upper East Side for the opening of I Like It Like This, a new exhibition at Sotheby's S|2 gallery created in partnership with #Drizzy himself. Not surprisingly, we were hardly the only downtown cool kids who risked going above 14th Street for it; after all, MILK was a co-host.

Featuring works by influential black artists in America from Basquiat to Kara Walker, the show combines auction-worthy pieces with hip-hop pairings curated by Drake. You listen through Beats by Dre, obviously. While the Grammy-winner spent most of his time hanging out with Va$htie and looking pretty moody behind the DJ booth, he did venture out into the well-heeled/faux nonchalant crowd to pose for photos with artist-in-attendance Betye Saar and speak in low tones in front of a collage wall. When Drake left the room a little after 9 pm, most of the night's attendees (including Scout Willis, Swizz Beatz, and Jenné Lombardo) filtered out behind him, iPhones on camera mode above their heads. Turns out they were heading back downtown to the neon-lit after-party at Milk.