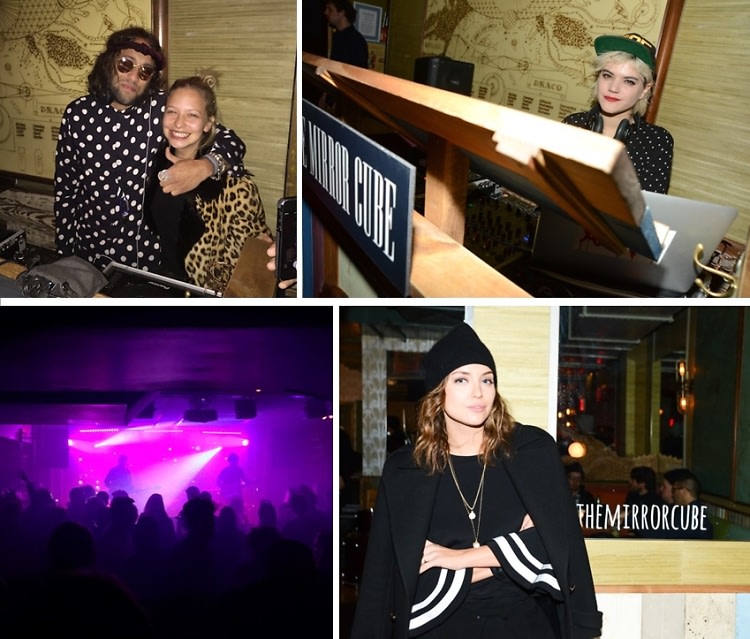 Since the holiday break New York has been sleepy, but the downtown crowd decided to make up for lost time last night at The Mirror Cube launch party at Baby's All Right in Williamsburg. The new website created by Jess Manaforts gives artists and creatives a platform to personally recommend their favorite art, music, and film events to anyone who wants to engage in that community. Following weeks of hibernation, guests were thrust right back into the mix, with a completely packed house, open bar, and 2 band performances. The night kicked off with buzzed-about singer Soko DJing during her brief stay in NYC. She set the tone perfectly with uptempo rock jams that made way for the opening act The Walking Shapes. In the front of the room Timo Weiland met up with photographer Rush Zimmerman and blogger Danielle Bernstein following his Champion collaboration a few blocks north.

The group met up with Amira Kassem at the bar to keep the vibe going, with Timo enjoying a brief moment of relaxation before getting back to work on his forthcoming fashion collection. Shortly after, Bear In Heaven got on the stage to an increasingly filled venue, with Harif Guzman, Adam Green, and Ashley Smith trickling in. The ever-stylish Waris Ahluwalia suavely made his way down to ramp right on time to see the band perform. As soon as they finished, a bandana-and-sunglasses-clad Alexander Dexter-Jones got on the decks and kept it in the family with opening tracks from the new Mark Ronson album. He closed out the fun night for a crowd that refused to leave, kicking off The Mirror Cube in style and setting the tone for the start of the 2015 party season.