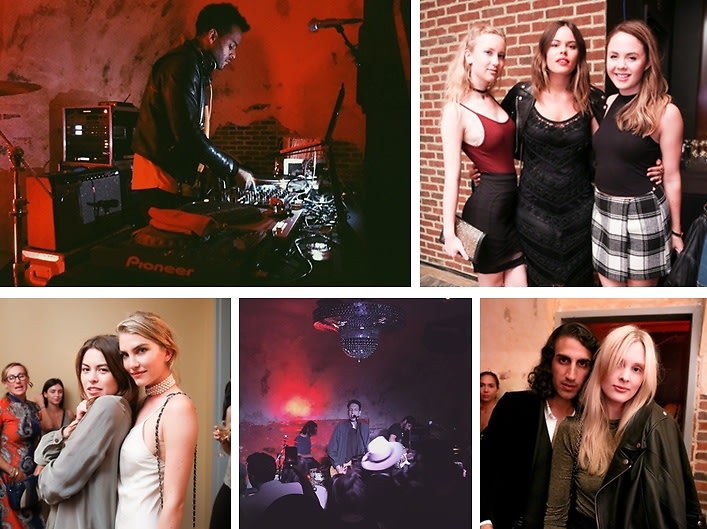 The night started pretty routinely at The Roxy Hotel, formerly known as the Tribeca Grand. The lobby of the hotel was largely unchanged, with only the DJ booth relocated to accommodate the performance by Curtis Harding during the 'This Is New York' pre-party. Here, the room was much more crowded than usual, with models Ashley Smith and Atlanta de Cadanet hosting tables. Alix Brown took over the decks as Harding finished, playing an all vinyl set of '60s jams that would warm up the crowd for the exciting new lounge below.

As guests trickled down the familiar stairs and through the kitchen, they were welcomed into an entirely new space with curved walls, dim red lights, exposed brick, and three heavily used bars. This was Django, the newest iteration of the hotels basement, which will be a live jazz venue. But not last night; a mix of music was played to a fully packed room, starting with a DJ set by Twin Shadow. He set the tone perfectly with an eclectic dance mix, before reuniting with girlfriend Zoe Kravitz for a drink. Next up was Paul Sevigny, who elicited enough excitement that some guests even proclaimed they hadn't seen Paul DJ in almost 10 years. He mixed his signature garage rock vinyl collection to a crowd that included Jamie xx, Ricardo Tisci, Mike Nouveau, and Andrew Bevan. The headliners Tanlines were up next, and performed their indie-pop songs to a dancefloor so crowded some guests opted to hang near the bar rather than attempt to reconnect with their friends across the room. When they finished up, the vibes switched up with Theophilus London, who immediately dropped a track by UK grime champ Skepta. As the drinks took effect and party-goers were loosened up, the hip-hop set hit the spot, and continued as Virgil Abloh, Heron Preston, and Mike Nouveau took over to DJ.

The night was a rousing, albeit somewhat misleading start for Django, as the proprietors would likely prefer it to remain a home for smooth jazz tunes over uninhibited partying. But we're looking forward to that, and knowing that the space is capable of a party like This Is New York only has us that much more enticed.

[Cover photos by Will Ragozzino/BFA.com]