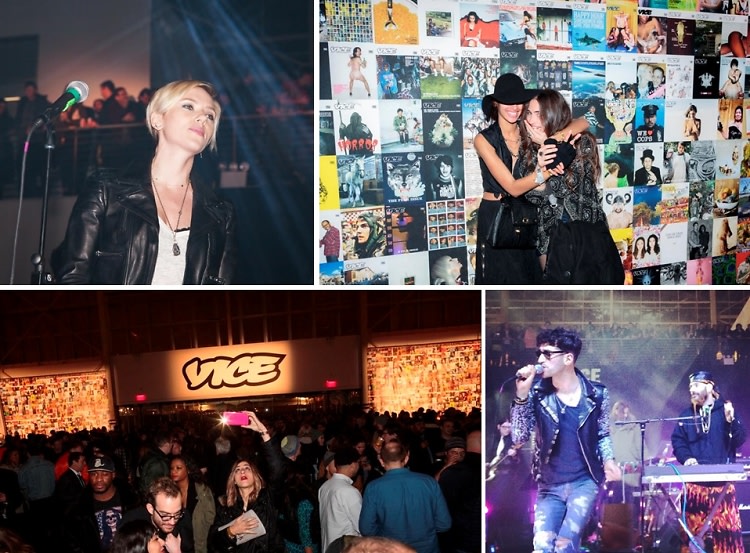 The controversial media giant may have had its humble beginnings in Montreal, but anyone who's familiar with VICE knows that Brooklyn was the only place the mag could have properly celebrated its 20th birthday on Friday. And a Brooklyn party it was—filled with beards, bands, and plenty of booze. Hundreds of VICE-lovin' partygoers waited in the rain at the gates of the Brooklyn Navy Yard, hoping to make it into the party before the musical supergroups of the night took to the stage. Plenty were lucky enough to get to the Duggal Greenhouse early, with plenty of time to peruse the variety of food trucks parked outside the venue before heading in and hitting one of the many open bars. The crowd tightened up, of course, when Andrew W.K. started the party with his hit "Party Hard," and became the official "unofficial" MC of the night, introducing everyone from Chromeo and the Yeah Yeah Yeahs to Ghostface Killah and the Black Lips onto the stage. The two most memorable performers, however, were the surprise celebrity guests, Jonah Hill and Scarlett Johansson, who sang sultry (yes, sultry) renditions of Drake and New Order songs, respectively. (Jonah Hill also faux-pleaded with Drake to be his friend, so let's wait and see how that turns out.)

The event culminated in a weed-smoking performance by Lil Wayne, who finally broke his silence about the drama with his label and delay of his album, though he urged audience members that it would be cleared up soon. Andrew W.K. closed out the live show with a raucously amazing cover of "Anarchy in The U.K." which ended with the guitarist crowd walking. Not surfing—walking. On top of the crowd. Needless to say it was an epic night, but what else would you expect from VICE? Click through for an inside look!