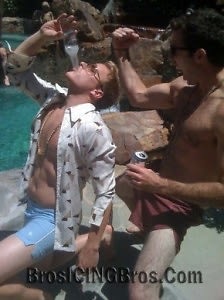 For anyone who has avoided bars and high school keggers lately, a new drinking game is sweeping the nation. It's called icing. It makes Beirut and Quarters look like advanced philosophy courses in binge drinking. And it has emasculated millions of frat boys as they've consumed a drink meant for girls in limos en route to prom.

Unlike other frat house boozing sensations that somehow seep into ostensibly grownup bars these days, icing is confined to a single alcohol product: Smirnoff Ice. The rules are simple. One participant hands a Smirnoff Ice to another who must get down on one knee and chug the whole sugary, barely alcoholic concoction. To ward off an icing, the victim must be in possession of his own bottle. If he is, he ices back his predator, who has the misfortune of pounding both drinks.

The labeling of the trend makes skeptics wonder if icing is a spontaneous activity that went viral or an underground marketing campaign by Smirnoff that went viral.

"The game has exposed the mercurial line between guerrilla advertising and genuine social media trends, raising questions about how young consumers can know when they have co-opted a brand for their own purposes, and when that brand has co-opted them." 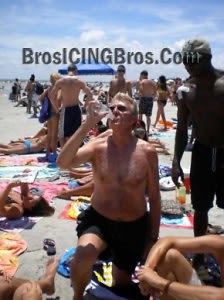 For liability reasons--no alcohol company wants to be seen as encouraging binge drinking, particularly amongst underage college students who comprise much of the icing population--and, perhaps, to maintain the mystique of the phenomenon its admen created, Smirnoff denies culpability. A statement from the company said that:

"Icing is consumer-generated, and some people think it is fun. We never want underage 'icing' and we always want responsible drinking."

If you stayed awake until the end of that legal department boilerplate, it doesn't sound like much of a denial at all.

There are other conundrums that arise from icing.

It has spread to indie rock bands like Frightened Rabbit, Deer Tick and The National. Do these serious musicians partake in icing earnestly or ironically? Is earnestness cooler than irony these days, anyway? When a band with hipster cred and more than a trace amount of self-regard ices, does it elevate icing or debase the likes of Matt Berninger?

Icing has also spawned a cottage industry of websites like Bros Icing Bros devoted to the game, proving that Generation Overshare will gleefully post photos of themselves doing just about anything, no matter how silly or, Church Lady moment, damaging to future employment opportunities. 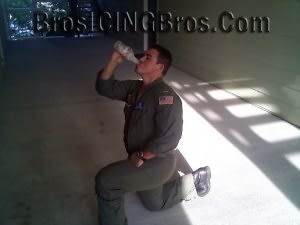 Finally, icing is a drinking fad that ignores the underdog. Smirnoff Ice might suck--one fan of the game interviewed by Goodman admits it's a "pretty terrible" drink--but it's hardly undiscovered. At least the mysterious affinity college students have for Olde English, or the biological need hipsters develop for PBR, shine spotlights on unheralded companies.

For all its problems, compromised authenticity and, well, stupidity, icing is as disturbing as a round of hopscotch when compared to vodka eyeballing. Eyeballing is a (possibly made up) trend said to be all the rage with college kids who pour the liquor into their eye so as to bypass that pesky 5-10 minute wait for a buzz.

Icing might rob you of your dignity, but at least you'll keep your vision, even if it's impaired by beer goggles.

Photos via, you guessed it, BrosIcingBros