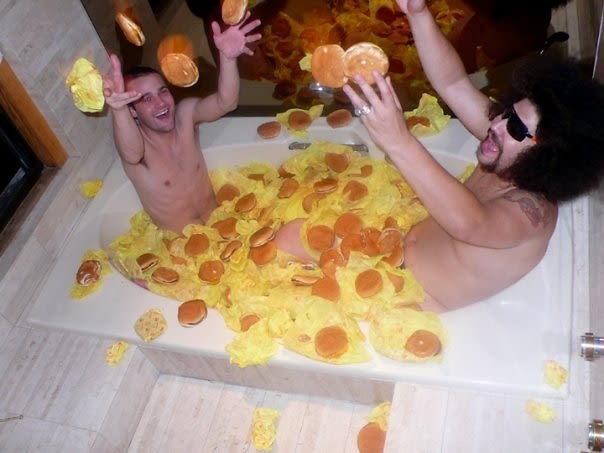 Baron Von Fancy is not a man, he is an idea. And you cannot kill an idea.

He has been called an artist. He has been called a maniac. He is a recluse. He never sleeps. He is the artist in the turtleneck sipping espresso at the café. He is the dirtbag on the street corner trying to sell you a fake Rolex. His life will make you either laugh or cry uncontrollably. It could even make your head explode.

Born on Thanksgiving Day in futuristic neon-draped 1980’s Tokyo, the son of an art thief and a United States senator, the Baron was raised and nurtured in the bosom of privilege. As a toddler, the Baron lived an extraordinarily lavish life. His mother’s breastmilk was mixed with liquefied gold before the Baron’s lips were allowed to touch it, and his diapers were hand-woven from the skin of endangered seals. An Asian butler, a reserved Korean named Ping, pulled the Baron about town in a rickshaw, and they became the closest of friends.

After moving to New York in his teenage years, the Baron discovered his affinity for the eccentric, erecting a bronze statue of himself holding a baguette and a pheasant in the middle of Herald Square. Despite the fact that it was removed by the police department only hours later, the statement had been made. He opened a nightclub atop a mountain in Te-Aviv Israel, released 5,000 doves inside Madison Square Garden during a Jon Bon Jovi concert, and created the world’s most famous oil painting of Charlie Chaplin’s mustache, a piece that resides in the Kunst- und Ausstellungshalle der Bundesrepublik Deutschland Museum in Bonn Germany.

Never one for the public eye, the Baron exists in secrecy, emerging only to use the world as his canvas, and to romance those women lucky enough to be spotted by his selective eye. The most notable of these women was Anechka, a 17 year old Ukrainian gymnast who was liberated from her repressive trainer by the Baron during one of his many jaunts to Eastern Europe. She served as his muse for several years, and was the inspiration for many of the Baron’s earliest pieces including “Girl wears jelly sandals in orchard” (1999, oil on canvas) and “Milky Calves” (2003, acrylic on brick.) Hundreds of women have claimed to have slept with the Baron, and the rumor that his penis is shaped like a lightning bolt is widespread.

The Baron will push the limits. He will continue to defy the odds. He will not fail.

Baron Von Fancy is not a man. He is an idea. And you can’t kill an idea.