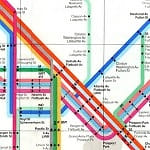 Despite yesterday's eye-rolling, we are heartened to see that certain forms of artistic expression are still alive in the city. The latest breaking visionary: the MTA! Well, actually the 1970's incarnation of the Metropolitan Transit Authority who so wisely tapped Massimo Vignelli to design its Studio 54-looking subway map. This month, Men's Vogue enlisted the artist to update and publish his iconic rendering so that we may (maybe) persuade the jaunty-hatted MTA folks that lend their loudspeaker vocal stylings to our daily commutes to revamp it.

Vignelli's map looks like a smashing rendition of neo-punk, post-classicism, realistic expressionism something that makes me wanna watch Reading Rainbow with a bowl of pixi stix. We love its primary colors and soothing, rounded edges that one can only hope means the ride from Brooklyn will be smoother, right?

[Such Hubbub Over a Subway Map]