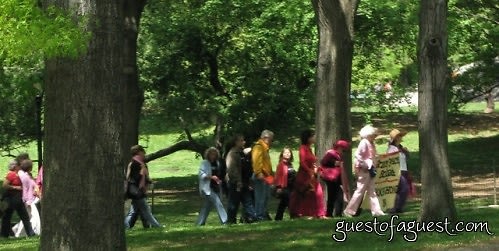 With our country’s media fixed on the choice of Obama vs. Clinton, it seems almost like a lifetime ago when people cared about the war in a country an ocean away. That is why, in the peace and calm of a beautiful Sunday afternoon, it almost felt like a put-on when a sizable contingency of folks, mostly older men and women, marched ahead through Central Park, chanting:

"Bring them back, From Iraq, Bring our troops home now – ALIVE!"

And this was during Mother’s Day too. This is no put-on, however: they are the Granny Peace Brigade. Who are they? This snippet from their website should offer elaboration:

When a group of women ages 59 to 91, many of us grandmothers, tried to enlist in the United States military on October 17, 2005 The Granny Peace Brigade was born. We asked to enlist in order to replace grandchildren who had been deployed in Iraq unnecessarily. However, we were arrested and charged with disorderly conduct. After a six-day trial, we were acquitted. That was the beginning.

I have to admit, there is something amazing about seeing people who have lived through at least two periods of war in our nation’s history and still refuse to drop their urge to rabble-rouse in such a way to prove their point. While I refuse to divulge my own stance on this whole thing, I do have to at least acknowledge their urge to keep the good fight going by reminding us that there are mothers out there bereft of their flesh and blood because of what is going on overseas. Go Grannies!