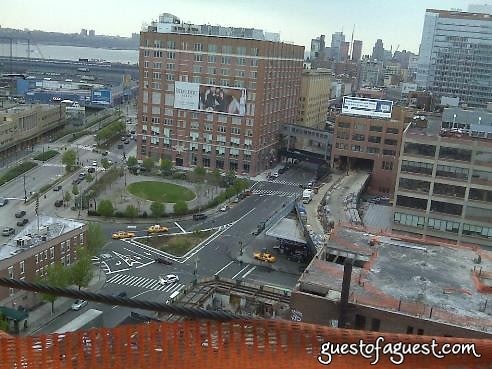 [View from inside the Standard Hotel]

"We are tingling already with excitement." -Hotel Chatter

"A luxury hotel growing beneath, above, and around the rail line, as an oak tree envelopes and old fence." -The New Yorker

They've already taken on Hollywood, L.A., and Miami Beach, and awhile back The Standard Hotel group decided that it was time they did Manhattan. There has been tons of chatter about the new hotel that is "coming soonish" above Richard Hammond's Highline on Washington street (between w12th and 13th st). While their website has a real time picture of the progress of the exterior part of the hotel (updated every 15 minutes), we got some current sneak peak pictures of the space from the inside out:

[Interview With Richard Hammond: The Man Who Saved The Highline]