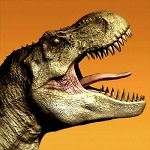 There’s a long history of filmmakers bringing monsters to New York City, from King Kong to the Cloverfield monster, but the dinosaurs in Madison Square Garden tonight are more than just light projected onto the big screen. The critically acclaimed BBC TV Series Walking with Dinosaurs brings you fifteen life-size dinosaurs, including the big, bad T-Rex, in this bold theatrical extravaganza that has been years and $20 million in the making. From tonight until August 3rd, you can see them as they were during their 200-million-year reign as rulers of earth.