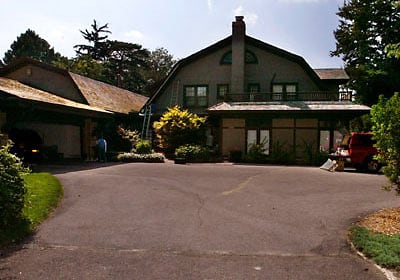 I have never been ashamed to admit where my roots are.  Omaha may not have an Ivy within driving distance, and may be full of a lot of corn fields, but it ain't made up of dummies.  Above sits Warren Buffet's modest house by Elmwood Park (a favorite area of mine).  It is the quintessential home for the quintessential value investor.  The quaint 6,000 sq foot gray stucco house was purchased in 1958 for a mere $31,500.  Today Buffett is worth upwards of $50 Billion and recently purchased $5 Billion in Goldman Sachs stock.  And yet he has never left his roots in Omaha, rather opting to stay far far away from Wall Street, much like a Hollywood mega star who shuns Tinsel Town.

Now, take a look at the difference in Buffet's house versus Richard Fuld's (CEO of Lehman).  Fuld's house is worth an estimated $11 million dollars, sits on 12 acres in Greenwich, CT, and has annual property taxes of $70,000 (twice of what Buffet paid for his home).  Fuld's net worth is hurting quite a bit these days with the collapse of Lehman Brothers and the financial sector as a whole.  The security costs alone for his Greenwich mansion must dwarf those of the Oracle from Omaha's.

In any event, it has been a long held sentiment among investors to watch out for CEOs when they start to build their house.   You can tell a lot from a CEO by looking at his house.  Is the CEO spending too much time building it and not focusing on his company?  Is he being extravagant, wasteful, excessive?  Buffet's house screams value. It is a most reassuring sight for an investor in Berkshire Hathaway, and anyone who wants to take a bet on Buffett.