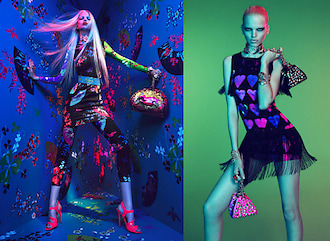 The Versace for H&M collection won't hit stores until November 19, but if you're desperate for a neon leopard, flower-infused fix immediately, you might want to head over to a site called Germany Street, where the entire collection is online for sale now.

Fashionista.com received a tip about the site, which is hosted on a European marketplace similar to Amazon called Taobao. And while the legitimacy of the retailer is difficult to confirm (the entire store is in Chinese), a quick Google search pulled up four or five selling agents and how-to guides for buying from Taoboa. That said, it's up to you to determine the authenticity of the actual items. The retailer does promise that they are genuine.

Pulling a fast one like this will cost you though, as the conversion from Yuan to dollars is close to a 60% markup, which is pretty steep considering that you haven't even factored in shipping costs (which can be anywhere from $44.50 to $214).

Given the chance that your stuff may be held up in customs and may not be real anyway...your best bet might be to wait a week and just fight it out in line.