Exactly 4 years ago I went to my first fashion show at the tents at Bryant Park. My friend David Boatman produced videos vignettes of all the major runway shows for MSN, so he got all the good invites and he benevolently gave me a couple. I had never been to a fashion show before and especially not during Fashion Week in New York. I was a LOT less glamorous back then. I was working at JPMorgan in a job that I could not stand and my wardrobe was SO corporate casual. I mean, I always dressed well, but I didn’t embody the sense of fashion and style that I do today.

I went to the tents wearing a yellow J. Crew button down shirt and brown plaid pants from a thrift shop and shiny black Kenneth Cole Loafers. (I know, Kenneth Cole; ugh) I did my best to pull it all together. With invite in hand, I proudly marched up to the check in spot. I got a little white card with an “S” on it and wondered what row my seat would be in. Forty minutes later, after waiting in a packed line contained by velvet ropes and bossy ushers, I proceeded to be cattle herded into the huge tent. I was amazed as I watched people scurry to their seats. 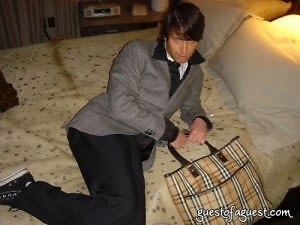 There was a brilliance of excitement in the air. Cameras were everywhere waiting to capture something fabulous like beautiful people dressed to the nines who were air kissing and posing for pictures. PR people with headsets were frantically trying to make everything work. This is where I belonged.

I quickly learned that the “S” meant standing – but by now I didn’t even care. As the lights went down, plastic was peeled off the runway and I knew the show was about to begin. I remember I was standing right by the speaker because I felt the base rush through my body as the music cued right after the room went dark. The room was quickly illuminated by spotlights focused on the runway, the music rushed in even louder and I was swept up in the wave. I got a host of chills that pulsed through my body and my eyes began to fill with tears. In that moment I felt fabulous for being there – and lucky. I had dreamed of this moment.

I watched in awe inspired delight as the models methodically paraded the fashions down the runways in an unmistakably beautiful trance. This was fashion. This is what I waited for. This needed to be a part of my life, I thought. From that moment, I was never the same. That fashion show became a catalyst for change.

Seven months later I left JPMorgan to join the luxury skin care world in Sales, Marketing and Product Development. On the side I continued to contribute to a couple websites as a beauty commentator.

It is now four years since that first fashion show and I still get that same rush of excitement when I pull up to the tents for the first time during fashion week. I think to myself, I’m still here and it keeps getting better. I get a lot more invites now and am asked to cover the shows. I sometimes get seats in the first 3 rows. Other times, I am still standing, which doesn’t phase me. For me, fashion week isn’t about the parties, it’s about the fashion and the excitement that comes with seeing a preview of trends to come in the next season. The colors, the looks, the make-up concepts, the hemlines, the accessories: the possibilities.

The possibilities that when we dress up in a way that makes us feel fabulous or glamorous -- anything is possible. There are people who have told me time after time that fashion is no big deal and people waste too much money on clothes. Those people probably never have had that feeling that I had when the music first started thumping behind me at that first show. I felt it tingle and rush with excitement into every area of my body – but I know now that was not the music, it was the excitement of fashion. At that moment I had a spiritual connection to the infinite universe of fashion. I was there to appreciate beautiful clothes worn in an artful and inspiring way. I was willing to be a part of it like so many are. I was among a group of people who have triumphed to these moments in a Darwinian sort of way; perhaps because we are willing to spend our last cent on that perfect trench coat or (for the ladies) wear a pair of heels that give them blisters to a point of not being able to walk for 3 days after. I was meant to be part of this fashionable life.