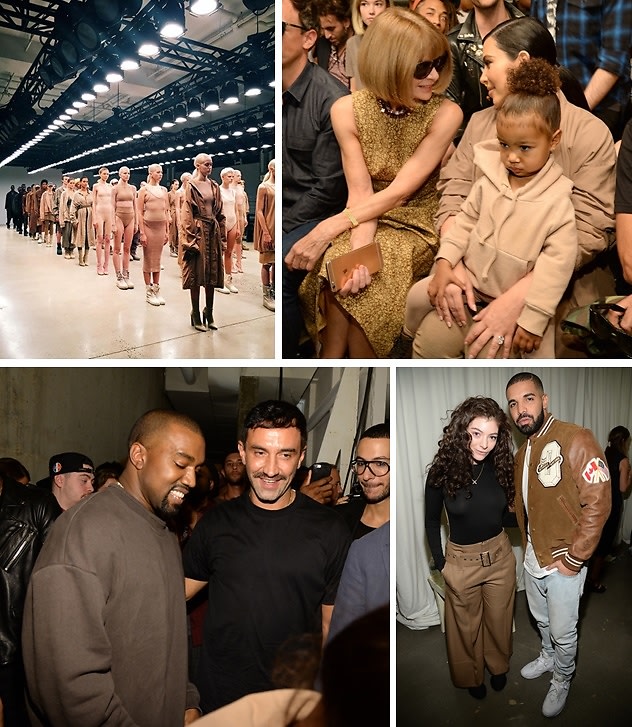 Kanye West premiered his Yeezy Season 2 Collection for Adidas Originals at Skylight Modern on Wednesday afternoon the way everyone expected him to; to the beat of his own record. This season, the show wasn't only lacking Beyonce, but also differentiation from West's debut aesthetic - the comfortable combination of sheer shape-wear and oversized outerwear that everyone remembers from Yeezus Season 1. None of that matters though, because our attention was drawn from the collection itself to the seating where Kendall J. was somehow in the second row, Courtney Love found her way to front, Queen Wintour kicked it with comedian Seth Meyers, and North West saved the drama for her mama.

On top of the awkward seating arrangements, Kanye managed to piss off most of the industry with the scheduling of his show, or rather, lack thereof. The show was added to New York Fashion Week at the very last minute. Designers including Naeem Kahn and Anne Bowen who had meticulously planned logistics for their own shows several months in advance found themselves scrambling to reschedule based around the media frenzy that was Yeezy 2. This was no mistake as West knows his pull in the media and his ability to draw the eyes of fans and critics alike, Bowen told WWD. Many are in agreement that this was distasteful move and have not kept quiet about their disappointment, taking complaints up with the CFDA who have officially responded that the Kanye x Adidas show was never on the official Fashion Calendar, therefore is unlisted and out of their jurisdiction.

But, back to the clothes. I mean, that is why we're all here in the first place, right? Sources of inspiration have been speculated to have come from Star Wars, the Walking Dead, and Zoolander... but mostly Star Wars (see Twitter). The collection also featured a wide range of color, perfect for spring and summer. The palette ranged from beige to dark beige with accents of taupe. Not that we're judging! After all, neutrals are the way to most every New Yorker's heart- so brownie points for you, Kanye. Ha, brown.

Perhaps this show was less about fashion as it was about social media sensationalism and Kanye's ego; but we'll leave the final word up to you.

Click through to see the seating, the show, but most importantly- style icon North West.