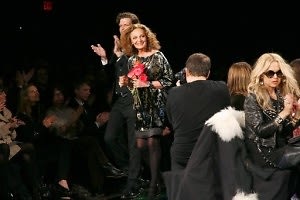 [Photo by Amber de Vos for PMc] Miss out on Fashion Week shows this weekend? Not us--we sent our tireless interns to nearly everything, and had them report back to us. Below is a roundup of some of our favorite shows this past weekend...

The GofG team logged miles (often in very high heels), attending not only the big tent shows, but also presentations all over Manhattan. Believe it or not (and some of us are choosing NOT to believe it), Fashion Week is only halfway over, so be sure to keep checking back for more coverage of shows and afterparties! 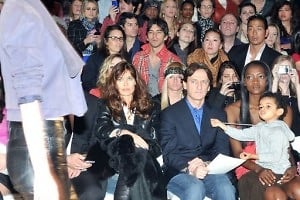 Something you normally don't see: Designer Luca Orlandi sitting in the front row of the Luca Luca Fashion show, viewing his own collection. Lots of metallics, purples, and furs in the versatile collection. Attendees included Kelly Bensimon, Veronica Webb, and Allison Brie.

[Photo at left by Jonathon Ziegler for PMc] 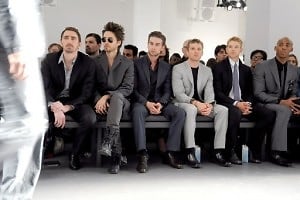 Calvin Klein boasted what will probably the best looking Front Row at FW this year: Jared Leto, Chace Crawford, Ryan Phillipe, Kellan Lutz, and Mechad Brooks. Not that the runway models were bad looking, either...

[Photos by Billy Farrell for PMc]

Custo Barcelona never disappoints when it comes to colorful and vibrant collections and this season was no exception. The theme was "jewels" and all the models shone like diamonds. The sequins, faux fur and silks came together to give a luxe look that is both of the moment and forever Custo. 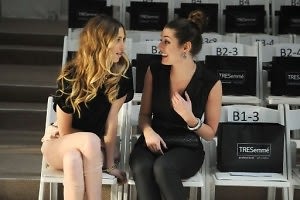 The Charlotte Ronson show at the Bryant Park Promenade was one of the more celeb-studded shows, with Whitney Port, Tinsley Mortimer, Cory Kennedy, Solange Knowles, Matt Dillon, Shenae Grimes, Ally Hilfiger, Becka Diamond, Annabelle Dexter-Jones and Ann Dexter-Jones. Models wore turbans and walked down the catwalk to music spun by Samantha Ronson. Go HERE for coverage of the After Party!

[All photos by Clint Spaulding for PMc]

DvF's show in the main tent of Bryant Park was a huge draw as always. What was not as always were the palette and silhouette. Gone were the crazy colors and shift silhouettes that are her trademarks. A bevy of skirted looks and neutrals took their place for much of the show. Stalwarts like prints, wraps and Rachel Zoe made appearance so while she may be evolving, some elements of DvF will remain forever the same.

[All photos by Amber De Vos for PMc]

Anna Wintour isn't quite as ubiquitous at New York Fashion Week as one might think, but she definitely made it out to Prabal Gurung's show on Saturday afternoon. Other attendees included Zoe Saldana, Rachel Zoe, Brad Goreski, Lynn Yaeger, and Fern Mallis.

[All photos by Thomas Evans for PMc]