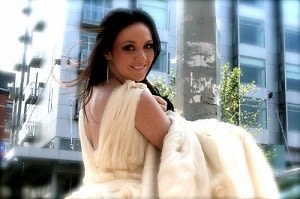 They are planning a September 16 event (benefiting the Mercy Ship"s work with obstetric fistula in Liberia and Sierra Leone) revealing Tani"s newest couture collection, an event that is not to be missed. But First I suggest you wrap up fashion week on September 13 with the next Shopping, Champagne and Charity! Interested? Then, please RSVP to AprilLynn.Martin@gmail.com.

April Lynn Martin, who was recently featured for her charity work between Lydia Hearst and Eric Trump in The Circuit and as July New Yorker of the Month is also the creative co-founder of the C Squared Group - a company that hosts professional networking events for upscale urban professionals. Prior to her current projects in NYC, April spent nearly 11 years involved with hands-on charity work which State-Side included: serving the homeless through soup kitchens; Meals of Wheels; Big Brothers Big Sisters; crisis pregnancy centers; ACT for battered and abused women; as well as work with the elderly in convalescent homes. Internationally her charity work has included: working victims of human and child trafficking in corridor countries like Mexico and the Dominican Republic; serving on and alongside a Mercy Ship in West Africa; working with AIDs orphans and illegally detained prisoners as well as the development of various microfinance projects. April inherited a love for fashion and philanthropy from her vintage-collecting grandmother Oneida Joyce Martin and a love for humanitarian work and travel from her globe-trotting grandmother Dorothy Estelle Hagen.

Tani Keller launched her exclusive private label shortly after her arrival to the United States in 2000. She distributed it to several high-end boutiques and department stores nationally (Barney´s, Scoop). Due to requests from high-end clientele and celebrities, she started fashion consulting and a custom-made business providing leather couture, evening wear, and bridal wear. In addition Tani presented three collections in New York´s Fashion Week: The Beach, The Chessgame and The Garden of Eden. Tani is unique in her field demonstrating a capability to design and tailor with fabrics ranging from leather and snake to the finest silks and chiffons. Tani Keller has appeared in numerous national and international magazines and newspapers, featured on Fox television and her designs were seen on billboards from the East- to the West coast in the US. She has been nominated as one of the five best designers in womens apparel by Fashion Group International ( 2003), and received the award "Most Innovative Designer" by Couture Fashion Week (September 2005). She designs for private clientele and celebrities including Carol Alt, Millennium Playmates, Playmate of the year, Eve, Halle Berry, Gloria Estefan, Roselyn Sanchez and Danica Patric. Tani Keller received her greencard of extraordinary ability in 2006 and continues today her business in the fashionable Meat Packing District.