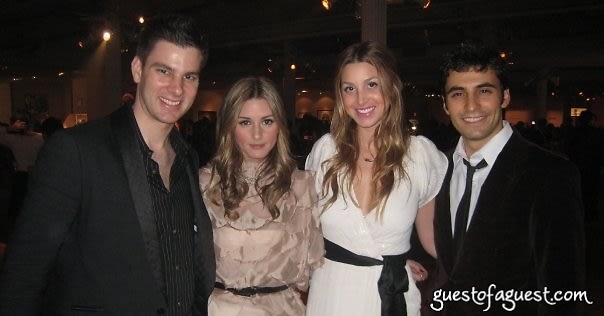 and HERE for photos by Max Flatow and TAG YOURSELF and YOUR FRIENDS!!

Olympic Fencers, and GofG writers Tim Morehouse and Jason Rogers attended their first Charity:Water Ball last night and had a blast mingling with "The City" stars Whitney Port and Olivia Palermo as well as meeting the founder Scott Harrison, and actor Adrian Grenier, and hanging out with their regulars, Richie Rich, Keith Lissner, Douglas Marshall, etc. We will be posting our post on the event later today, along with hopefully hearing Scott and Naeem's night.  Click below to read more about what Tim and Jason had to say:

"Adrian Grenier hosted the third annual Charity Water gala at the Metropolitan Pavilion, and along with 2500 guests we got to view the amazing photographs of founder Scott Harrison’s journeys to Africa to help impoverished villages receive clean water.

Though the non-profit organization, Charity Water, is only three years old, I don’t think you could find a person in city who would say they haven’t made a splash in the New York charity circuit while also aiding thousands of people with over 1000 water projects in 13 developing nations including Ethiopia, Bangladesh and Rwanda.

As Adrian guided the program, our friend Richie Rich drank his “bubbles” and brought his usual cheer, “The Hills” actors Whitney Port and Olivia Palermo scmoozed as cameras for their new show “The City” tagged along, model Camilla Barungi educated others about the benefits of the African Moringa supplement, designer Keith Lissner mingled with other fashion forwards, and our favorite crew of Scott, Naeem, Liam McMullan and Lydia Hearst surveyed the scene." More>>>>>>>